President Trump threw a wrench into coronavirus stimulus relief, calling the massive spending bill “a disgrace” and threatening to veto the legislation if Congress doesn’t go back and up the individual checks from $600 to $2,000. 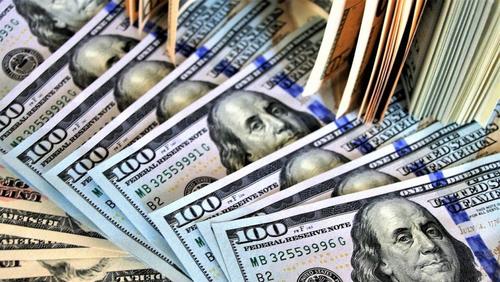 It remains unclear how the politics will play out. House Speaker Nancy Pelosi tweeted “Let’s do it!” putting pressure on Sen. President Mitch McConnel to go along with the increased stimulus. What is pretty certain is stimulus is coming down the pike – whether sooner or later. Before Trump made his surprise remarks, Peter Schiff talked about the stimulus bill on his podcast.

Peter put the size of this bill into perspective, noting that it would fill up a set of encyclopedias through volume “I.”

How long would it take you to read every single word on every page in the encyclopedia all the way through the volume ‘I?’ Clearly, nobody in Congress made any effort to read this bill.”

And yet it passed by overwhelming majorities in both houses of Congress.

Peter noted that the national debt has already increased by $4.8 trillion in this calendar year.

Obviously, if this bill is signed and those stimulus checks … get mailed out before the end of the year – of course, they want to hurry up and get those checks out there for Christmas presents – the national debt will explode and more than $5 trillion of debt will have been added in this one year, in 2020 all by itself.”

The entire national debt didn’t reach $5 trillion until about 1999. In other words, the US government added as much debt in a single year as it did in more than the first 200 years of its existence.

Rick Santelli was on CNBC saying 2020 wasn’t really such a bad year. Although GDP collapsed in the second quarter, there was a big rebound in Q3 and it looks like it will only be down slightly on the year. But Peter said people like Santelli are only looking at one side of the equation.

The problem with focusing on just one side of the national balance sheet is that you get a distorted picture of reality. Because if we had to add $5 trillion to the national debt to prevent the GDP from collapsing, are we really better off? We’re not. You have to look at all the debt that we incurred. This is a horrible year if you look at how much more indebted we are at the end of the year than we were when the year began.”

Peter reminded us that every American is on the hook for their share of all of the money that was borrowed in their name.

As far as the stimulus/spending bill, Peter said he has no idea what all is in it. Nobody does. But it is certainly loaded up with pork.

Everything but the kitchen sink must be in there, because Congress knew that nobody would vote against it, at least not enough people to stop it, so, this was your chance – anything you wanted, shove it in here and it’s going to get passed.

As far as the coronavirus stimulus goes, the headline items were the $600 checks (maybe $2,000) for individuals, enhanced unemployment benefits of $300 per week and the expansion of PPP loans for small businesses.

Peter noted that the enhanced unemployment will continue to incentivize people not to work.

Peter said the real fraud is going to come with the payment protection loans for small businesses. In reality, they are more like grants because as long as the business doesn’t fire its workers, the loans will be forgiven. The program was intended to help businesses that were shut down by state and local government due to COVID-19, but the program wasn’t limited to those businesses. Even businesses that were making more money due to the pandemic could get these “loans.” Congress tried to fix that in this bill by limiting the loans to businesses that had a 25% year-on-year revenue drop during any quarter in 2020. And that creates a perfect opportunity for fraud. Businesses simply have to work some accounting magic and defer revenue in Q4 2020 to Q1 2021 and viola, they qualify for a “loan.”

Remember, there are a lot of businesses that are COVID winners – businesses that actually did better in this environment than they did pre-COVID. There is nothing in this bill that limits those businesses from getting the free money.  And in fact, all you have to do is certify that your revenue in one of the quarters was down by 25%, which is easy to do anyway with creative accounting.”

And of course, all of this will be paid for by the Federal Reserve.

All of it is paid for by the printing press, by inflation, and that means the dollar is going to collapse.”

The dollar hasn’t collapsed yet, but it has weakened significantly over the last few months. Gold has gone up, but it hasn’t gone through the roof. But it is coming.