Peter Schiff: The Fed Between A Rock And A Hard Place

The markets seem to think the Fed is going to fight inflation. They believe that the central bank will pivot to tighter monetary policy sooner than expected as inflation heats up, even though Jerome Powell keeps insisting inflation isn’t really a problem. In a recent podcast, Peter Schiff said that the truth is the Fed is between a rock and a hard place. It couldn’t fight inflation even if it wanted to. Doing so would kill the economy. The only other choice is to surrender to inflation. 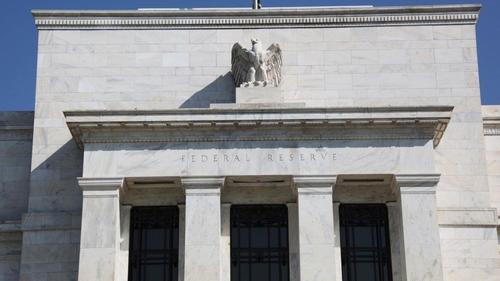 Late last week, Jerome Powell sat down for a televised interview with the Wall Street Journal. The topic of conversation was long-term interest rates. The reporter noted that traders were pricing higher inflation into the yield curve. As Peter has been saying, the increase in interest rates has little to do with economic growth and everything to do with inflation. Although he didn’t come right out and say it, Powell implied that that market is wrong. The Fed chair insists he does not think inflation is a threat.

In fact, Peter said if you listen closely to what Powell said, it’s clear he still thinks the real problem is a lack of inflation. Powell admits that he thinks there will be a sharp jump in consumer prices around the middle of the year. But he said this is just because prices are being compared to the middle of 2020 after there was a big drop due to the coronavirus economic shutdowns. So, in Powell’s mind, this isn’t a fair comparison.

Yes, it looks like there’s an inflation problem, but he’s going to look past that problem to a normalization. So, what he is telling the markets is ‘hey, I don’t care if I see some hotter CPI numbers because I know they’re transitory. I know that they don’t mean anything.’ And what the Fed expects is after that big blip up in inflation for inflation to come back down.”

Powell is looking back over the past 10 or 20 years and thinking that because we haven’t had high inflation in the past, we won’t have high inflation in the future. He’s reasoning that since we did QE1, QE2, and QE3 during the Great Recession with no inflation problem, we can do it again. Peter called this “a false sense of confidence.”

If the Fed actually believes that, they’re completely wrong.”

It appears the markets aren’t buying it. They’ve been behaving as if they expect the Fed to take action and tighten monetary policy to fight the inflationary fire. This is why we’ve seen a bit of dollar strength and the big sell0ff in gold. Peter said he thinks Powell’s apparent lack of concern is scaring the bond market even more because it realizes that if the central bank doesn’t act soon, the inflation fire will get bigger and it will take even more water to put it out.

But Peter said the bond markets actually understood the truth, it would scare the bejesus out of them – the truth that the Fed isn’t going to fight inflation at all.

It can’t. It can’t fight inflation because inflation will win. It has to surrender without a fight. Because fighting inflation, as far as the Fed is concerned, the cure to inflation is worse than the disease of inflation.”

But Powell can’t say that. He can’t admit he’s not going to raise rates no matter how high inflation rises. If he did, the bond market would really get clobbered.

Peter said we could easily see stagflation coming down the pike. If food and energy prices continue to rise, it will force consumers to cut spending in other areas. That could lead to more businesses going under and a rising level of unemployment. Businesses will also feel the pressure of rising input costs. One way to deal with that is to cut labor costs.

So, it’s very possible that we’re going to have a combination of increasing unemployment and rising interest rates. That the predicament that we were in in the 1970s. The US economy was in much better shape structurally back then than it is now. If we could have stagflation during the 70s, we could have something much worse now. I’ve talked about it as an inflationary depression.  That’s what I think we’re coming to. We’re going to get the simultaneous condition of prices going way up and unemployment going way up.”

The cure – tighter monetary policy and rising interest rates – would kill us in an economy built on piles of debt.

The Fed has the tools to deal with higher inflation, but it won’t use them because it will destroy the phony economy it has built.

How is the Fed going to solve a problem where inflation is worse than they thought? They have to basically put a bullet in the head of the economy. They have to kill it. And there’s no way they’re going to do that. So, they don’t have a tool that they’re willing to use to deal with an unexpected outburst of inflation.”

Is it possible to do that? Of course, it’s impossible to do that. Look at the enormity of the debt. Look at the budget deficits. Look at all the leverage now in the new housing bubble that’s been inflated. And it will be even bigger by then. So, the whole economy is a gigantic credit bubble completely dependent on artificially low interest rates, and the whole thing would be destroyed if the Fed had to raise interest rates to fight inflation, which means they won’t raise interest rates to fight inflation, which means inflation is going to win and it is going to destroy the savings of Americans.”

They are wrong. If they understood that the Fed has no control over inflation, that all they can do is lie and pretend that it doesn’t exist, that we’re never going to have positive real interest rates, that they’re going to be negative as far as the eye can see, if the markets knew the truth, then gold would be going up. It would be going to the moon. The dollar would be going through the floor.”