Peter Schiff: We Don’t Get Any Government For Free

Last September, Peter Schiff warned during an interview on RT Crosstalk about the devaluation of the dollar.

Everybody in America is going to be impoverished to a degree by these failed policies.”

Peter recently appeared on the Chris Salcedo Show on NewsMax to talk more about government spending, inflation, and the weakening dollar. 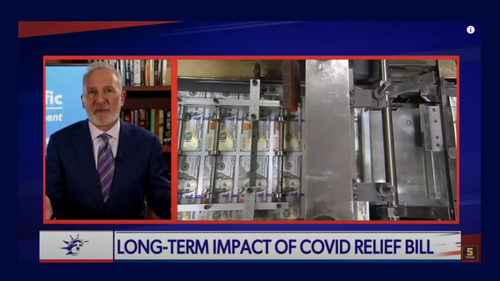 When the government funds its programs through taxation, it literally takes people’s money. But when it funds its activities through printing money it more subtly takes their purchasing power.

And that’s exactly what they’re doing. This is a massive inflation tax, and the American public, particularly the middle class and the working poor, are going to be hit exceptionally hard by the cost of all these deficits and all this stimulus.”

Salcedo noted that the US isn’t alone in its government spending, and central banks around the world are printing money. Global sovereign debt is approaching $277 trillion with a global debt-to-GDP ratio of over 360%. Where does America fall in the whirl-spin of spending?

Peter agreed that this is a global problem, but he said the US is doing it to a larger scale and from a more vulnerable position. As the issuer of the world reserve currency, the US depends on the overvalued dollar for its high standard of living.

We have huge trade deficits, which by the way are at record levels, along with record budget deficits. But the only reason we can finance these huge trade deficits is because the world has been willing to hold on to our currency because it is the reserve. But if we jeopardize that status, which I think we’re going to do — if the world balks at holding the trillions and trillions of dollars that are being printed and all these Treasuries to make all this deficit spending possible, then the dollar has a lot further to fall in terms of real purchasing power than other currencies.”

The US has benefitted the most from this dysfunctional financial system and it will suffer the most in the short-term if it comes to an end.

Could a weaker dollar benefit the US? Peter doesn’t think so.

Certainly, the world has thrown a lot of good money after bad when it comes to propping up the dollar. But when the dollar declines, it’s going to take the US economy down with it, and the standard of living of every American.”

The rest of the world is going to benefit from the demise of the dollar because Americans have only been able to live beyond their means because the rest of the world has been willing to live beneath its means to make it possible. But as the world moves away from the dollar, foreign workers are finally going to start to consume all the goods that they produce instead of allowing Americans to consume them, and foreigners are going to invest their savings productively in their own economies rather than loaning them to the US government. So, Americans are going to wake up in a very different reality when we will have to start saving and producing and making a lot of stuff, but not going out and spending and borrowing money. And the US government is going to have to dramatically cut back on its government spending and level with a lot of the American public that they’re not going to get all the benefits that they’ve been promised because if we try to make good on these commitments, and we do it with a printing press, then the risk is hyperinflation, and we completely any value the dollar has. And that is the worst possible economic outcome.”

Incitement Or Free Speech? Comey Calls For The Republican Party To Be “Burned Down”