Peter Schiff: When Paul Krugman Talks, Nobody Should Listen

The latest Biden/Democrat stimulus bill is just the beginning. There is more government spending coming down the pike. That means more money printing. But Paul Krugman says not to worry. It didn’t cause a big jump in CPI last time and it won’t this time either. Peter Schiff talked about it in his podcast. He said when Krugman talks – nobody should listen. 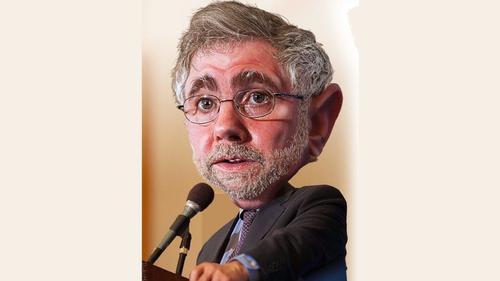 With the ink barely dry on a $1.9 trillion stimulus bill, reports are circulating that the Biden administration is about to unveil another $3 trillion spending proposal. This round of stimulus will reportedly target the Democratic Party agenda, including infrastructure spending, funding for aspects of the “Green New Deal,” and money to tackle “wealth disparity.”

The spending plan will likely include tax increases. Of course, tax increases on “the rich” have been a Democrat mainstay for decades, but this plan may tax a little further down the income ladder than promised during the campaign. Peter said this shouldn’t come as any surprise.

That’s why when they asked Willie Sutton, ‘Why do you rob banks?’ he said, ‘Well, that’s where the money is.’ Well, if you want to raise a lot of tax revenue, you can’t just target the top-end earners. The money is lower down. It’s the middle class, or the upper-middle class, that has a lot of money that you’re going to need to tap into if you’re planning on funding 3 to 4 trillion dollars worth of spending.”

Peter said he thinks to the extent that that tax increases do target the wealthy, some Republicans will have a hard time voting against infrastructure spending that will supposedly benefit the masses of voters that is all going to be paid for “by the rich.”

So, you lose the votes of the 1% to solidify the votes of the 99%. I mean, politicians can do math, right? That’s the only thing they can add up – votes. And they know there are more votes at the 99%.”

Peter said, he ultimately thinks these bills will pass, even if there is little to no Republican support.

The mantra is that all of this spending will “stimulate the economy.” But Peter said it will only stimulate one thing – inflation.

They’re going to light a fire under consumer prices, which I have been discussing on this podcast are going to be going up in a manner that we have never experienced before in this country.”

Peter said one difference is the way the government measures CPI now won’t even capture the real extent that Americans are suffering.

I think in real terms, if we had a more honest CPI, we’d probably be showing inflation rates above the 1970s by this year if not by next year.”

But there is one person out there assuring us there is nothing to worry about – Paul Krugman.

The New York Times columnist and Keynesian economist is out there taking another victory lap reminding everybody that he was right when inflation didn’t spike after the 2008 financial crisis. He’s saying that people like Peter who have been warning about the consequences of government borrowing, spending and money printing are just the same old doom-and-gloomers, and fear mongers who were wrong before. After all, according to Krugman, the Democrats got us out of the economic hole George W. Bush dug us into with deficit spending and stimulus. Republicans and people like Peter who were saying all of the money printing was going to cause inflation were just using it as a fear tactic.

Of course, I didn’t say that. I said all this money printing is inflation. It will lead to higher prices. And it has and it will. Just not nearly as much as it’s going to. But because we have not seen more substantial increases in a rigged CPI, Krugman is now saying ‘I told you so!’”

Part of the problem is the same Republicans who are now talking about inflation signed onto the stimulus bills when Trump was in office. It’s easy for Krugman to call them out on that hypocrisy.

And in one sense, Krugman was right. CPI never exploded to the levels that many feared. But he was right for the wrong reasons.

It’s just because the world was wrong in their assessment of the efficacy of US fiscal policy and monetary policy, and the ability of the Fed to actually do what it was bluffing it could do, which was normalize interest rates and shrink its balance sheet back down to pre-financial crisis levels. And on anticipation of normalization of interest rates, shrinking the balance sheet, and the fact that then Europe embarked on the same failed QE policy, only later than we did, the idea was we would be tightening while the rest of the world was still easing; we were the first into the crisis but we were going to be the first out, and that created a lot of demand for the dollar. And that helped support the US economy, the US bond market, and it temporarily kept a lid on consumer prices and made it appear the Krugman was right.”

He was not right. He was wrong.

We are going to get all the effects of all that inflation. It’s just going to happen later than people like I believed. It’s going to be happening, I think, now.”

This has emboldened Krugman. He thinks he was right just because he’s a brilliant economist. It doesn’t matter that we’re printing more money than ever before. It doesn’t matter that the US government is running massive deficits. We need more government. We need more spending. This is the Keynesian prescription. We just need to take our medicine and everything will be fine. According to Krugman, these Republicans just need to shut up and let the Democrats fix things.

Peter called this a complete joke.

But the joke is going to be on the rest of the country because this time Krugman is going to be wrong for the wrong reasons instead of right. Or maybe that’s wrong for the right reasons. I’m not even sure. But he’s dead wrong and all of this money printing and all of these deficits are going to result in a big increase in consumer prices. Not just a one-off increase, or a temporary increase, but this is the beginning of a major reset of the price structure in the United States. And it’s going to continue for years and years and it’s going to continue to build and feed on itself mainly because the Fed is going to be so far behind the curve by the time it even acknowledges, if it ever does, that there’s an inflation problem. Because the initial higher reads will be dismissed as transitory, so how long is it going to take before the Fed admits that it’s not transitory?”

And when it does finally realize inflation is out of control, it will be too late. The only way to put out the fire would be a massive increase in interest rates and a severe tightening of monetary policy. As Peter put it, the Fed would have to “go Volker.” The economy would collapse. It can’t raise rates to that extent with all of the debt in the economy. The Fed is between a rock and a hard place, no matter what Krugman thinks.

Boeing 777 Makes Emergency Landing In Moscow Due To Engine Trouble