If nothing else, the blockage of the Suez Canal by a massive container ship has served as an unwelcome reminder that chokepoints to global trade like the Straits of Hormuz, the Straits of Malacca and the Straits of Gibralter represent geopolitical risks that have perhaps haven’t been fully appreciated by investors. 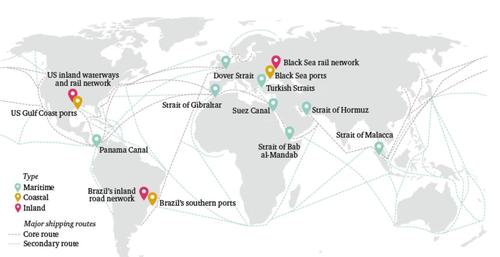 Of course, vulnerabilities to global trade extend beyond these narrow chokepoints.

Take, for example, the South China Sea. The United Nations Conference on Trade and Development estimates that roughly 80% of global trade by volume and 70% by value is transported by sea. Of that volume, 60% of maritime trade passes through Asia, with the South China Sea carrying an estimated one-third of global shipping. Under President Trump, the US Navy intensified to check growing Chinese naval power in the area.  And just the other day, a US spy plane flew closer to China’s coast than ever before.

Well, in a concerning sign that tensions might be about to come to a head in the region, Reuters reports that Philippines leader Rodrigo Duterte has complained to Chinese ambassador about Chinese naval forces that have been massing in the area. In recent days, international concern has grown over what the Philippines has described as a “swarming and threatening presence” of more than 200 Chinese vessels that it believes were manned by China’s maritime militia. The boats were moored at the Whitsun Reef within Manila’s 200-mile exclusive economic zone.

EXCLUSIVE: We have footage showing nearly 200 Chinese vessels in Philippine waters. The government has demanded China to withdraw these vessels, but more than that, a maritime expert suggests taking the matter to an international court.

Brunei, Malaysia, the Philippines, Taiwan, China and Vietnam have competing territorial claims in the South China Sea. But China has pointedly ignored all these claims, instead viewing the South China Sea as something that belongs exclusively to Beijing. China shocked the world in 2016 when it ignored an international court ruling validating the Philippines’ claims to the sea. Since then, tensions over the conflicting claims have complicated relations between the two Pacific powers.

China’s claims have put pro-Beijing leader Duterte in “an awkward spot,” according to Reuters. China’s embassy in Manila has reportedly said the ships were fishing ships taking shelter in rough seas. But visuals like the video clip above appear to contradict this.

China’s maritime assertiveness has put Duterte in an awkward spot throughout his presidency due to his controversial embrace of Beijing and reluctance to speak out against it.

He has instead accused close ally the United States of creating conflict in the South China Sea.

China’s embassy in Manila did not respond to a request for comment on Duterte’s meeting.

On Wednesday it said the vessels at Whitsun Reef were fishing boats taking refuge from rough seas. A Philippine military spokesman said China’s defence attache had denied there were militia aboard.

Vietnam, which is also a party to the overlapping territorial claims, has also complained about China’s presence. Foreign Ministry spokeswoman Le Thi Thu Hang on Thursday said the Chinese vessels at the reef had infringed on its sovereignty.

A Vietnamese coastguard vessel had been moored near the area on Thursday, according to ship tracking data.

The story hasn’t made much of a mark in the American press. But if Chinese ships keep massing in the area, investors might start asking themselves whether cementing Beijing’s control of the disputed waters could be a preamble to something much more concerning – like a move against Taiwan, perhaps?

Major US Cities Are Becoming Fentanyl-Infested Cesspools As Millions Plunge Into Hopelessness, Despair

And Now They’re Hoping For My Death