For the past few years, I have been critical of the Ponzi Sector. To me, these are businesses that sell a dollar for 80 cents and hope to make it up in volume. Just because Amazon (AMZN – USA) ran at a loss early on, doesn’t mean that all businesses will inflect at scale. In fact, many of the Ponzi Sector companies seem to have declining economics at scale—largely the result of intense competition with other Ponzi companies who also have negligible costs of capital.

I recently wrote about how interest rates are on the rise. If capital will have a cost to it, I suspect that the funding shuts off to the Ponzi Sector—buying unprofitable revenue growth becomes less attractive if you have other options. Besides, when you can no longer use presumed negative interest rates in your DCF, these businesses have no value. I believe the top is now finally in for the Ponzi Sector and a multi-year sector rotation is starting. However, interest rates are only a small piece of the puzzle. 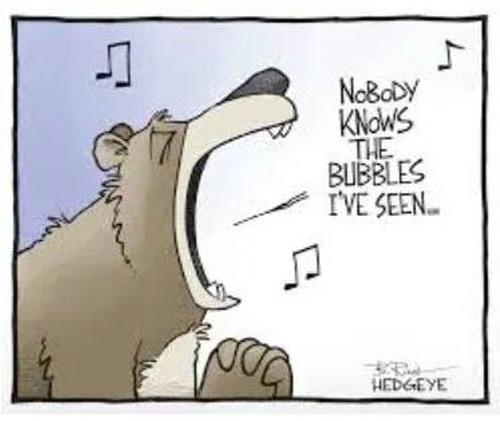 Conventional wisdom says that the internet bubble blew up due to increasing interest rates. This may partly be true, but bubbles are irrational—rates shouldn’t matter—it is the psychology that matters. I believe two primary forces were at play that finally broke the internet bubble; equity supply and taxes. Look at a deal calendar from the second half of 1999. The number of speculative IPOs went exponential. Most IPOs unlock and allow restricted shareholders to sell roughly 180 days from the IPO. Is it any surprise that things got wobbly in March of 2020 and then collapsed in the months after that? Line up the un-lock window with the IPOs. It was a crescendo of supply—even excluding stock option exercises and secondary offerings. The supply simply overwhelmed the number of crazed retail investors buying worthless internet schemes. Back in 2000, I used to joke that in a scenario where a company wanted to raise equity capital, but insiders wanted to sell, they’d both dump shares on the market—but the insiders would get out first. What do you think that did to share prices as both parties fought for the few available bids?

However, the proximate cause of the internet bubble’s collapse was when people got their tax bills in March and had to sell stocks to pay their taxes in April. What’s the scariest thing in finance? It’s when you owe a fixed tax bill from the prior year, yet your portfolio starts declining. You start selling fast to stop the mismatch. Trust me, I’ve been there. Tax time is pushed back a bit this year, but it is coming.

Admittedly, All 3 Are Full Of Shit…

I bring this all up, because the SPAC market is in the process of detonating and it will take the Ponzi Sector with it. Let’s look back at the internet bubble. A VC firm would IPO 4 million shares at $20, the stock would open at $50 and end the day at $100. Everyone chased it to get in. Then the brokers would upgrade it and the CEO would go on TV. With a 4 million share float, it was easy to manipulate the shares higher. Often, the newly IPO’d company would level out well north of $100 a few weeks later. It was a virtuous cycle and everyone played the game. What was left unsaid was that there were another 46 million shares held by management and VCs and these shares would hit the market 180 days later. At first, the market absorbed the new supply so no one showed concern—then the market choked. I wrote about this when talking about the QS unlock. This process is about to repeat, but now with the odd nuances of SPACs.

A typical SPAC deal involves a few hundred million dollars raised for the SPAC trust—this is the only real float. Then a few hundred million more is raised for the PIPE—these guys are buying at $10 because they plan to flip for a gain as soon as the registration statement becomes effective—which is often a few weeks after the deal closes. When a company merges with a SPAC, billions in newly printed shares are given to the former owners—those shares start to unlock a few months later in various tranches. Finally, the promoters behind the SPAC get to sell. When you look at a pre-merger deal trading at a big premium to the $10 trust value, you’re looking at an iceberg. There might be ten or twenty restricted shares for every free trading share—all of these guys desperately want out. It’s a game theory exercise—how do you find enough bag-holders without destroying the price? Hence, part of why the current price is determined by an artificially restricted float and the unlocks come in tranches. As restricted shares come unlocked, the promoters lose control of the float and the house of cards collapses. 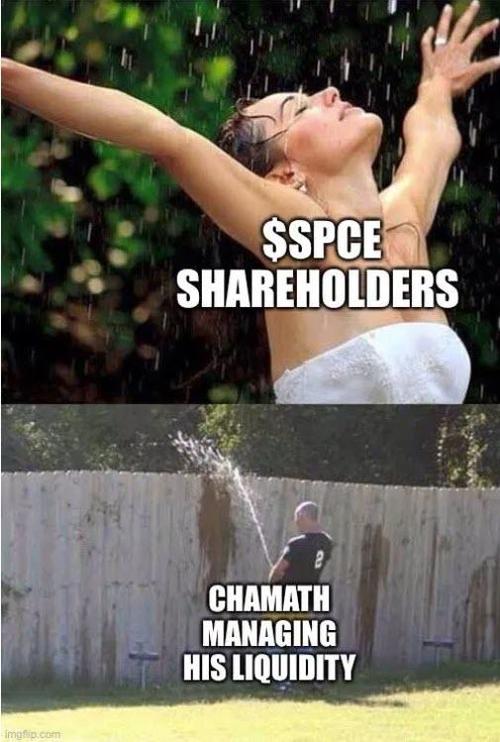 Part of the hilarity of SPACs is that the promoters claim to be aligned with shareholders because they exit last in terms of unlock tranches. What’s left unsaid is that their shares have almost a zero-cost basis—hence when they sell out at well under $10, it’s still all profit. Meanwhile the acquired company insiders often have an even lower cost basis because they founded the company at a negligible cost, there were bidding wars by various SPACs which drove the valuations to nosebleed levels and the acquisition targets are often mostly fake anyway.

When there were only a few high-profile SPACs, this supply could be absorbed—very much like 1999 with internet IPOs. This made people unconcerned about the supply deluge. Now we’re starting to enter the teeth of the unlock window from 2020 vintage SPACs. There are literally tens of billions a week in stock flooding the market—except there’s no natural shareholder base for these things. There are only so many retail punters who wake up and want to buy a fake “green” company with no revenue and no path to revenue—much less profits. When everyone is making money in ESG themed frauds, it draws fresh capital into the bubble and helps inflate things. When the losses start stacking up, capital leaves—yet there are still hundreds of billions of dollars in SPAC shares waiting to be unlocked and dumped. Remember how their cost basis is effectively zero? The insiders and promoters literally do not care what price they sell at. It is the internet bubble all over again.

You may wonder how the SPAC bubble will infest the rest of the Ponzi Sector. It comes down to collateral and shareholder bases. On the collateral side, much of the Ponzi Sector bubble is built on leverage. That could be margin debt or YOLO call options, but it’s all leverage. As asset values decline, brokers will force punters to de-lever. This will lead to waves of selling, leading to more forced selling. As for YOLO call options? They’re not exactly firm bedrock when it comes to a bubble. The SPACs and the Ponzi Sector are all tied together, because they all have the same shareholder base. As these owners take losses, they’ll be forced to sell “best in class” Ponzis like Tesla (TSLAQ – USA). 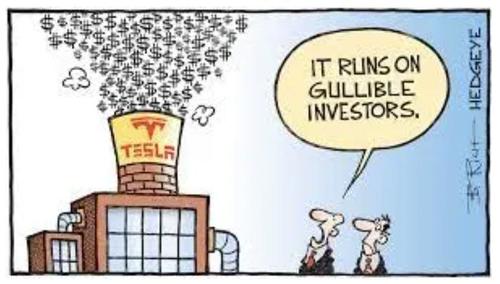 Back in 1999, there were various firms that enabled the internet bubble. They had handshake agreements that they’d be given IPO allocations, on the understanding that they wouldn’t sell—in fact, they frequently bought more in the open market, often at many times the IPO price. This allowed VC firms to tighten up already tight floats and manipulate shares higher. As these firms outperformed, they had inflows, allowing them to continue buying the same companies and pushing shares higher—leading to more inflows. It was a virtuous cycle and many firms worked together as wolf-packs in the same names. When redemptions came, these firms were forced to sell and the process unwound—except it was unusually speedy to the downside as the share prices were artificially propped up.

I have my sights on a certain ETF for this cycle. Go through ARK Innovation ETF’s (ARKK – USA) position list, go through all the quasi-affiliated firms that have copied this position list. All these firms have surprising concentrations in the same names. When it comes tumbling down, you don’t want to own any of these positions—especially the ones where ARKK owns more than 10% of the shares. You won’t want to own positions that are owned by people who own ARKK type positions as they’ll be forced sellers too. You want to be as far away from the Ponzi Sector ecosystem as possible.

I don’t know when it’s going to blow, but if I’m right that the top is in, the deluge isn’t too far off. Bubbles are highly unstable – if they’re not inflating, they’re usually bursting – there isn’t really a middle option. I think the past few weeks are more than a simple pullback—the losses from the SPAC bubble are going to dent the Ponzi Sector psychology. With this in mind, I took my long book way down over the past few weeks (including my GameStop (GME – USA) straddle for a nice score). That said, I don’t have shorts because this is still “Project Zimbabwe.” If I’m wrong, so be it. I’ll do just fine on my Event-Driven book. Besides, 2021 has already been a pretty spectacular year for me.

If you haven’t subscribed yet, go to KEDM.COM

Turning to Grayscale Bitcoin Trust (GBTC – USA), it now trades at a surprising discount to NAV—partly due to the shareholder base’s cross-ownership of other Ponzis. I had told myself that I’d hold GBTC through the sort of shake-outs that Bitcoin is famous for. However, this week when I went through my position sheets, I asked myself if I really needed this much exposure to a Ponzi Scheme, after repeatedly reminding myself that the Ponzi Sector is detonating. As a result, I booked a bit more than half of my GBTC exposure—taking all of my cost basis out and then some. I’m not going to say that my dismount in the mid-$40s was graceful—I wish I had sold it with a $5 handle, but I’m up 4-fold in 8 months and it still feels like quite the victory. For now, I intend to keep the rest of the position, though I’m moving my stop up once again. Will Bitcoin get caught in the downdraft? Who knows; I don’t need a position limit while I find out.

But Kuppy, what about “Project Zimbabwe?” Won’t the Ponzi Sector go up with everything else? My good friend, Kevin Muir, over at The MacroTourist (if you aren’t subscribed, you are missing out), likes to say that we’re “experiencing a period of rolling bubbles.” History says that once a bubble pops it rarely re-inflates. I believe that the Ponzi Sector bubble is now past the apex. With losses stacking up, the bubble psychology will break and people will start looking at things rationally again. How does this square with my “Project Zimbabwe” paradigm? It squares perfectly. We will have a rotation and some other asset class will bubble up next. I suspect it is one where increased cost of capital and massive government interference shuts off supply growth. Could inflation beneficiaries be next? I want exposure where the puck is going, not where it’s overstayed its welcome for far too long. On this pullback, that is where my focus will be.

Disclosure: Funds that I control are long GBTC.