A potentially crippling, historic snowstorm will pummel parts of the Rockies and High Plains this weekend with multiple feet – multiple feet! – of heavy, wet snow that could cripple travel, damage or actually bring down trees and knock out power in parts of Colorado, Wyoming and western Nebraska, warns weather.com.

Early this week, snow blanketed parts of Wyoming, Nebraska, the Dakotas and Minnesota, with a few locations pickings up a foot of snow. But that was just an appetizer. This weekend’s storm will be the main course.

“The storm has the potential to rank among the biggest on record in Denver,” AccuWeather Chief On-Air Meteorologist Bernie Rayno said. It could be one of its biggest snowstorms since 1885.

The record for the biggest snowstorm in the Mile High City has stood since 1913, when a storm lasting from Dec. 1 to Dec 5 unloaded 45.7 inches of snow.

“The rate of wet and clinging snow can be excessive, create whiteouts and lead to trees and power lines coming down,” AccuWeather Senior Meteorologist Brett Anderson said. Blowing and drifting snow is anticipated in the vast open areas and over the ridges and through the passes.

Several feet of snow – as much as five feet (150 cm) – is projected to pile up over the foothills west of Denver and in southeastern Wyoming.

The monster storm threatens to be a long-duration event that could result in snowfall totals nearing 2 feet in Denver and as high as 3 feet west of Denver, such as Boulder and Fort Collins. 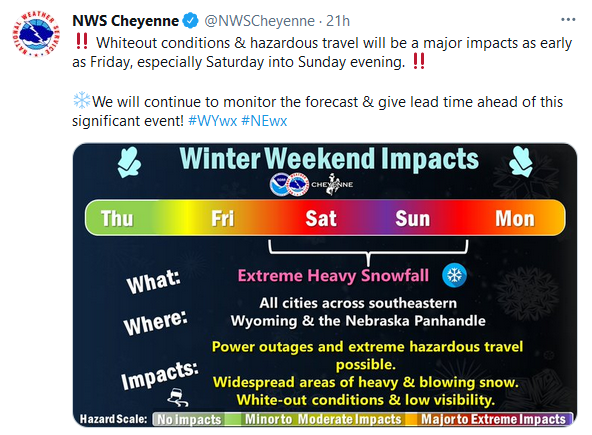 There is high confidence that parts of southeast Wyoming, the Nebraska Panhandle and northeast Colorado will pick up at least a foot of snow late Friday into early Monday.

With a potential for more than 2 feet of snow to hit Wyoming’s capital city, Cheyenne, Wyoming, this could be its heaviest snowstorm on record.

It could also be the heaviest snowstorm on record to pummel Scottsbluff, Nebraska, since a mid-April 1927 storm dumped 25.8 inches of snow in three days in the western Nebraska town.

Snow may fall at the rate of several inches per hour at times Saturday and Sunday.

The post Potentially Historic Blizzard To Hit the Rockies and High Plains This Weekend appeared first on LewRockwell.