After tumbling on Friday amid speculation that a hard Brexit was inevitable, the British pound jumped in early Asian trading on Sunday following the earlier report that the U.K. and the EU said they will continue talking about a trade agreement, keeping hopes for a late deal alive.

Cable jumped as much as 1.2% higher at $1.3378 after UK PM Boris Johnson and European Commission President Ursula von der Leyen agreed to keep working on a post-Brexit accord, after earlier saying that negotiators had until Sunday to come up with a deal. 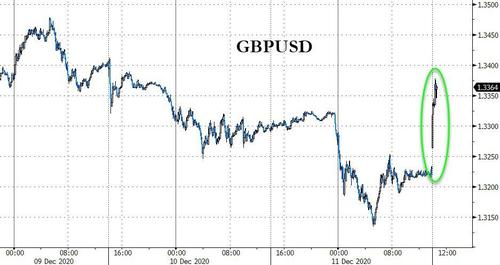 The positive Brexit news may also be one of the reasons  why spreadbetting firm IG is showing US markets as indicated modestly higher ahead of futures open. 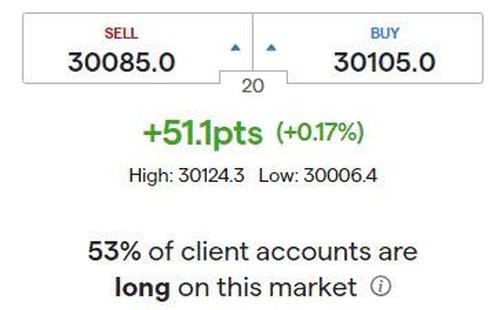 As reported earlier, the extension follows German Chancellor Angela Merkel’s exhortation urging that the two sides “should try everything to achieve a result”. In a joint statement, the two sides acknowledged that “despite the fact that deadlines have been missed over and over we think it is responsible at this point to go the extra mile.”

“We had a useful phone call this morning. We discussed the major unresolved topics. Our negotiating teams have been working day and night over recent days. And despite the exhaustion after almost a year of negotiations, despite the fact that deadlines have been missed over and over we think it is responsible at this point to go the extra mile. We have accordingly mandated our negotiators to continue the talks and to see whether an agreement can even at this late stage be reached.”

But in an indication of just how desperate both London and Brussels are to find something, anything, to feed markets and the public that might inspire optimism, the FT quoted an anonymous senior official in the Belgian capital, who said only that talks were “not going backwards”.

As Bloomberg adds, “with less than three weeks until Dec. 31, the date when the transition period for the U.K.’s departure from the EU officially ends, many investors had hoped for a breakthrough by Sunday — or alternatively clarity that Britain would indeed exit the bloc without a deal. Instead, they must prepare to parse yet more Brexit headlines amid choppy trading, with liquidity likely to get worse as the holiday season nears.”

If there is no formal trade agreement by the end of the year, decades of free movement of goods, services, people and capital will come to an abrupt end. British firms would revert to trading with the EU under rules established by the World Trade Organization in 1995. That means imports and exports to the EU would be subject to WTO-negotiated tariffs – essentially a tax on goods. Such a scenario could push the Bank of England to cut interest rates below zero for the first time ever, BofA analysts said, while Bloomberg Economics estimates Britain’s economy would suffer a near-term shock of around 1.5% of output.

In a report published early on Sunday, Goldman economist Sven Jari Stehn laid out the “costs of a no deal Brexit” in which he finds that should there not be a deal, EU-UK trade would revert to World Trade Organization (WTO) rules from January 1, with significant tariffs and quotas on goods. As a result, “for the Euro area, a WTO outcome would lower our Q1 forecast from +0.9% to +0.6%, and shave our Q2 projection from 3% to 2.9%, reducing the 2021 area-wide projection from 5.5% to 5.1%. As a result, the implications for the ECB would likely be limited, unless the WTO outcome leads to a sharp deterioration in Euro area financing conditions.” His main points are listed below: 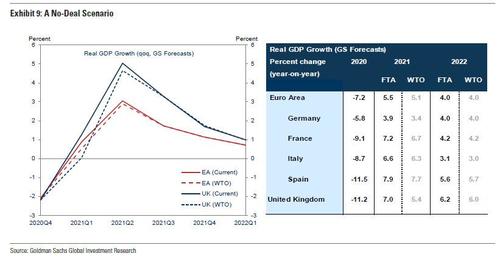 And in a separate note from Goldman published moments ago, the bank’s global equity strategist Peter Oppenheimer, writes that the reports and official comments of some movement on the key sticking point of how to manage future competitive divergence in level playing field provisions “suggests both a political will to forge an agreement and a technical path to draft the required text.”

As a result, Goldman expects sterling to appreciate by 1.5-2% against the Euro on the apparent progress towards a deal—or at least avoiding a no deal outcome for now. “This would effectively unwind the risk premium that has built in recent days, but still embed meaningful uncertainty about the likely course and end-state for the weeks ahead at this late stage in the negotiations.”

Finally, Goldman writes that its base case remains that a “thin” free trade agreement (FTA) will be reached before the end of the year, even though as the bank concedes “there is plenty of uncertainty around this” and Goldman’s economists, “given the lack of progress in recent weeks, now see rising risks of a no-deal outcome.”

The COVID-19 RT-PCR Test: How to Mislead All Humanity. Using a “Test” To Lock Down Society

When the elderly and frail die after receiving the COVID vaccine