The barrage of central bank announcement continued, with the BOE the latest bank to keep policy on hold, voting unanimously to keep the rate at 0.1% and QE at 875BN pounds

While that was not a surprise, what the market was focusing on was whether the BOE would continue its recent hawkish pivot that together with the recent good news on the UK’s vaccine front had helped send cable sharply higher in recent months.

So following in the Fed’s footsteps, and unwilling to risk its own taper, the BOE addressed that question head on, when the bank brushed aside a recent increase in bond yields, saying that overall financial conditions are “broadly unchanged” and writing in its statement that “the MPC will continue to monitor the situation closely. If the outlook for inflation weakens, the Committee stands ready to take whatever additional action is necessary to achieve its remit. The Committee does not intend to tighten monetary policy at least until there is clear evidence that significant progress is being made in eliminating spare capacity and achieving the 2% inflation target sustainably.”

Some more highlights from the BOE decision, courtesy of Newsquawk:

In kneejerk reaction, Credit Agricole FX strategist Valentin Marinov, said that “while the BOE is not necessarily more dovish today, it is by no means turning more hawkish despite the better data of late.” That could hurt the pound, especially against a stronger dollar, he said, and he was right, with cable – which had hit 1.40 earlier – dipping as low as 1.3945 although still well above the pre-FOMC level of 1.3850. 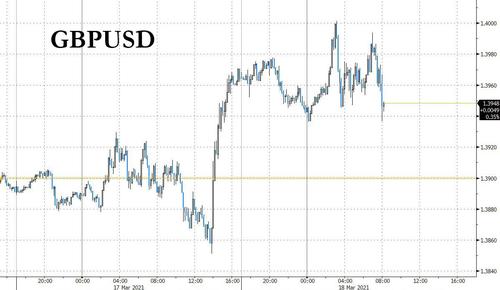 Vanda Research FX strategist Viraj Patel echoed the sentiment, tweeting that the “Bank of England much more two-way risks than what $GBP markets have been pricing in recent months on UK vaccine outperformance.”

But what we find most remarkable is how quickly the landscape has changed: just last month, the focus of the market was whether the BOE would address negative rates. Fast forward to today and there was not a single mention of NIRP by the BOE.