Powell Just Said US Economy Has To Add 500,000 Workers Every Month Or He Won’t Hike

Did Powell give everyone the green light to just keep buying stocks for the next two years?

Just hours after the latest CPI number came in lower than expected, with core inflation printing unchanged, and sparking a 10Y Treasury short squeeze which sent yields sharply lower, the Fed’s Powell then said that we will probably see an increase in inflation readings in coming months… but “that won’t mean much.” So, as Rabo’s Michael Every says “getting hotter – but please let’s focus on the colder parts.”

But here is the punchline: Powell explained that the latest 6.3% unemployment rate is not indicative of the economic reality, and underlined that the US economy is 10 million jobs down from where it was a year ago.

So, as Every notes, to replace all these lost workers by end-2022 – when consensus expects the first rate to take place – and accounting for natural labor-market growth, means we will need an average payrolls figure of over 500,00 every month through to next December. 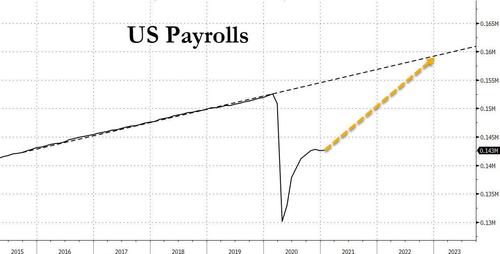 As the Rabo strategist notes, “that’s an awful lot of heating up.”

And since it is virtually assured that the US economy won’t be adding half a million people per month for a long time, it is safe to assume that the Fed’s rate hikes – as per Powell’s guidance – have been put on indefinite hold.

Which is why Every concludes that “markets will continue to do all the heating for the labor market, and very happily. Like a microwave meal, we are overheating some parts and leaving others cold: no central-bank rhetoric is capable of stirring things – is the government?”

Your Last-Minute ECB Preview: Here Are The Four Things Traders Will Be Looking For

“This Is The Biggest Bubble I’ve Seen In My Career” – Dems’ Infrastructure Spending Could Lead To Devastating Crash, Druck Warns