Authored by Mark Glennon via Wirepoints.org,

Gov. JB Pritzker and governors from six other high tax blue states sent a letter on April 1 to President Biden asking for elimination of the cap on SALT deductions for federal income tax calculations. That’s the cap of $10,000 on deductibility of state and local taxes, including property taxes, that became law in 2017.

The letter is heavy on claims of unfairness to the middle class. The opposite is true. 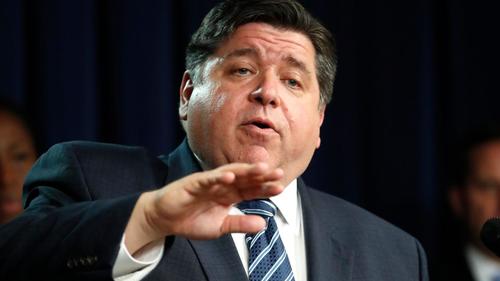 That’s “untenable given the dire economic conditions caused by the pandemic.” It goes on to say,

“In short, middle-class Americans are struggling under this federal tax burden, while corporations – which are still able to fully deduct SALT as business expenses – are profiting because of the same law. The negative impacts of the SALT cap on middle class families are particularly egregious when you consider that in the states most affected by this cap, the federal government already takes more in federal taxes than the states receive in federal support, effectively subsidizing federal payments to other states.”

Tax analysts on the right and the left have documented why that’s completely false. The cap on SALT deductions was a windfall for the middle class and hammered high income taxpayers. The conservative Tax Foundation explained why here, and the liberal Institute on Taxation and Economic Policy, ITEP, wrote this in an article opposing elimination of the cap:

And there’s much more to it. Eliminating the SALT deduction depressed high end home prices severely. Moody’s Analytics provided a study, estimating that home prices are $1 trillion lower than they would be otherwise. And the hit was to homes for the wealthy, not the middle class, because capping the SALT deduction made the after-tax cost of expensive homes far higher.

That’s particularly true in Illinois. You can see it in Moody’s data below of the 40 hardest-hit counties below. They are all in high property tax states with relatively high incomes.

Notice that Cook County and all Chicago’s collar counties are on that list: 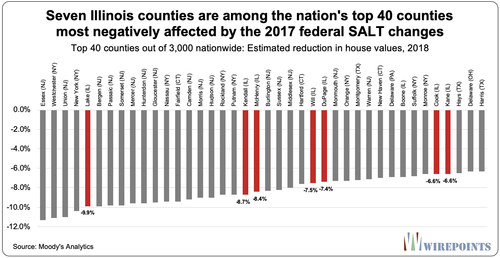 So, if Pritzker’s effort is successful, not only would the wealthy get a huge tax cut, they’d also see their home values soar by reducing the after-tax cost of ownership.

Pritzker is hardly alone in his hypocrisy on this. Illinois Senators Dick Durbin and Tammy Duckworth, as well as Illinois Rep. Brad Schneider, are leading the charge to repeal the SALT cap, which we covered earlier.

More hypocrisy and dishonesty is in Pritzker’s use of the old yarn that Illinois is treated unfairly because it pays in more to the federal government than it gets back. He included Illinois among the states where he says “the federal government already takes more in federal taxes than the states receive in federal support, effectively subsidizing federal payments to other states.”

For starters, Pritzker might want to update his research. The annual study most often cited on which states are “givers” and which are “takers” is by the Rockefeller Institute. For years it showed Illinois was a giver, having a net negative balance of payments with the federal government. But that turned positive over the last two years, according to the Rockefeller Institute — a rather historic change. Illinois has been getting back more than it puts in.**

But far more importantly, the entire concept is meaningless because it merely reflects the reality that federal tax rates are progressive, which progressives obviously support. States like Illinois pay much more in to the federal government than poorer states because they have more rich taxpayers. And poorer states receive comparatively more in federal aid programs than richer states. It is particularly hypocritical for progressives to complain about that result.

In essence, people like Pritzker claiming that Illinois has a deficit with the federal government might as well be saying, “Sure we think it’s right that the rich have paid more taxes, but now we want it back.”

Hypocrisy and dishonesty have no limits in politics. The SALT deduction is just another example. Most of the public will never know thanks to the confederation of liars and censors in corporate media and technology.

Scott Atlas Unleashed: Truth Matters, ‘Recovery From This Madness Will Be Slow’