In the Tweet heard round the world, George Stephanopoulos interviewed President Joseph Biden (note Infogalactic Internet encyclopedia also features an entry on 2020 Election fraud timeline as well) and asked a very provocative question about Vladimir Putin; as The Duran noted in a recent video, that will be posted below, it seems unlikely the questions and answers were spontaneous and not well planned by the controllers of President Biden, whom I assume are his cabinet appointees and staff at the CIA and State Department. The video excerpt via Twitter is below (but perhaps it will removed or perhaps they consider it a triumph) and this Reuters article via Yahoo News article, which summarizes:

“He will pay a price,” Biden told ABC News in an interview broadcast on Wednesday. Asked what the consequences would be, he said, “You’ll see shortly.”

At the same time, Biden noted that “there’s places where it’s in our mutual interest to work together” such as renewing the START nuclear agreement, adding that the two leaders have a known history.

“I know him relatively well,” Biden said, adding that “the most important thing dealing with foreign leaders in my experience…is just know the other guy.”

Of Putin, Biden said he does not think the Russian leader has a soul. Asked if he thought Putin was a killer, he told ABC: “I do.”

Unfortunately, the late Professor Stephen F. Cohen is no longer with us to have an intense conversation with John Batchelor discussing the latest events, but my perspective is much as his: I believe myself to be a National Security patriot, and I believe no good comes from not only hostile and degrading remarks that diminish the office of the American Presidency (although as Lew Rockwell has written with much wisdom on its perverse and malevolent nature, perhaps only the mask has slipped a little more to reveal the pathetic monster beneath, Anthony Fauci notwithstanding) that destroy all diplomatic norms, good manners, and subjects the Biden regime—if not America—to well deserved global ridicule, and shock and anger by the Russian people. After all, my perspective is that Russians are human beings, with a right to live live life as they see fit and have a government that they choose; the “ruling class,” the Oligarch sociopaths and the Neocons in the West seem full of hate to all things Russian, especially its people.

In no way do I consider President Putin to be above criticism or without sin; he’s a human being, and he governs Russia from a worldly perspective, I believe; he is not the last pious Christian Tsar who attempted to turn back the tide of a people who had become terribly godless and ultimately self-destructive; in no way is today’s Russia a nation whose majority follow the Way of Jesus Christ, for most of its people are secular and materialist, concerned with the things of this world. Yet all the same, a core believers in the ancient Orthodox faith remains, and I believe President Putin allows the Russian, spiritual revival to continue, with the building of many churches throughout the nation (certainly provoking the Trotsky loving Neocon’s ire).

Be that as it may—and I offer only my opinion—President Putin’s response to President Biden’s remarks presents to us the position of a statesman, who understands diplomacy is about civility and manners, even if you and your opponent do not agree or are in an adversarial relationship. This video of it might soon be removed from YouTube for violating its edicts, so I will also include a Yandex Translation of the key points made and covered in the Russian edition of TASS. I reproduced the translation in English of the title of the article and have left the relevant quotes from President Putin, which are in the below video.

(Since the link was to a translation, I no longer have it; perhaps searching site:Tass.ru using Yandex as the search engine and to translate the title in Russian words first might get results for those interested in reading the full text.)

(This video, the most recent, with sources and references discusses NATO/Washington plans to use Poland as cannon fodder to attack Kalingrad,  and justifying an attack on Kalingrad as a “protective” or defensive war, and anticipates using nuclear weapons and the Russians won’t respond in kind. However, Borzzikman does not detail likely Russian response using Avangard, the “dagger,” Iskander missiles, all non nuclear to destroy military targets and not civilians. The idea Russian wants to conquer and invade Poland is insane, but as Borzzikman discusses, these Baltic nations are stirred up into a frenzy of hatred and irrationality by Washington; this is a very dangerous situation but I do think the report is accurate.)

Lastly, I would be remiss not to discuss the state of the art F-35, designed with supercomputers and not slide rules as the ancient B-52 that was designed with the use of slide rules, and its latest proof of invincibility and air superiority, demonstrating the genius of the “exceptional” nation and the Pentagon. The article is “A Flying Disaster: F-35B Jet Shoots Itself With Its Own 25mm Gun,” on SouthFront, whose reporting has been much appreciated by the U.S. State Department, notes: 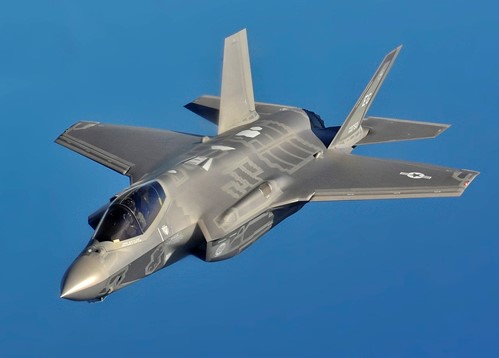 On March 12th, A F-35B Joint Strike fighter was significantly damaged. It happened when a round fired from its underbelly 25mm gun pod exploded shortly after leaving the muzzle of the cannon mounted within.

It suffered friendly fire from itself.

This is a “Class A mishap” – it results in a threat of the pilot’s life on the ground or in the air. It also needs to cause damage of more than $2.5 million.

Still, to be fair, if one is to keep in mind the F-35’s cost, any damage whatsoever probably results in damages that cost more than $2.5 million.

Prior to this incident, the F-35 has still been plagued by various incidents. Back in May 2020, a F-35A fighter jet crash-landed on runway 30 at Eglin AFB. The jet rolled, caught fire and was entirely destroyed.

Currently, the F-35 fighter jets fly with 871 flaws, having improved that number by 2 throughout 2020. On the upside, “only” 10 of these deficiencies are “Category 1” that can result in the aircraft being destroyed, or heavy injury or even death of the crew.

To rectify the chaos that is the $300 billion F-35 program, the Block 4 process was introduced.

On the upside, the US managed to successfully launch a nuclear-capable of Minuteman III intercontinental ballistic missile from Vandenberg Air Force Base.

Luckily, the launch went successfully, and even if it didn’t the missile is without nuclear or conventional payload.

This provides the potential for a justification for future actions. After all, if a missile were to accidentally hit a US city, or maybe a warship in an F-35-esque incident, it could easily be blamed on Russia. Or on Iran. Or on China. [Emphasis added.]

Still, any casual observer would be impatiently looking forward to the United States beginning to test out its hypersonic technology, since if the F-35 is any indication, it promises to be quality entertainment.

The post Putin Among the Barbarians appeared first on LewRockwell.

Why Trust The ‘Experts’?