As Russian President Vladimir Putin ramps up his aggressive campaign to stamp out COVID-19 once and for all (as Russia races to vaccinate its most vulnerable citizens while striking deals to supply “Sputnik V” to developing markets the world), the embattled president has just raised the possibility of distributing ‘immunity passports’, an idea that has gained traction around the world since the dawn of the pandemic.

According ton an RT report, the Russian government is considering the development and distribution of documents verifying whether individuals have been vaccinated. China has already road-tested technology transmitting people’s COVID status via smartphone apps, and it’s widely suspected that Beijing will impose some version of immunity passports, if they haven’t already.

Russian PM Mikhail Mishustin has been tasked with carrying out the policy.

In a series of instructions to officials, published at the end of 2020, President Vladimir Putin ordered policymakers “to consider issuing certificates to people who have been vaccinated against Covid-19 infections using Russian vaccines…or the purpose of enabling citizens to travel across the borders of the Russian Federation and those of other countries.”

Russia’s Prime Minister, Mikhail Mishustin, has been charged with implementing the recommendations, and is set to report back on January 20.

For once, Putin and American billionaire Bill Gates will be seeing eye to eye, as support for “immunity passports” grows not just among governments (even in “liberal democracies” like Canada), but the private sector as well. As RT reminds us, the IATA has voiced support for “immunity passports” as a strategy for hastening the revival of air travel.

The International Air Transport Association, which represents 290 airlines across the world, has supported the idea of vaccine passports, and is developing its own digital system to track who has been immunized against the virus. Passengers may be expected to present equivalent documents before being allowed to board planes in the future. Immunizations with the Russian-made Sputnik V vaccine, the first to be registered for the prevention of Covid-19 anywhere in the world, have been taking place in growing numbers in the capital and across the country. More than 70 centers in Moscow are now offering jabs, and at least 800,000 people have received their first dose.

Remember, once they arrived, people might soon find “Immunity Passports” will become a permanent facet of their lives: even after the COVID-19 pandemic ends, they could be used to offer evidence that a traveler has been vaccinated – not just for COVID-19, but for any other diseases, or even perhaps mutated forms of COVID-19.

Critically, as we noted previously, if we are going to live in a world where vaccines are mandatory for travel, who is to say that every nation on Earth is going to acknowledge the validity of every other vaccine. The Mainstream Media makes it seem as though just getting any vaccine with some sort of paperwork to back it up should be good enough, but this is unlikely to be true

If push comes to shove and this concept of travel papers based on vaccination (immunization passports) comes to pass then it is very likely that non-Western versions will “not count” at border crossings. Although with enough time and money one can probably get any type of vaccine anywhere, for the overwhelming majority this could create a new invisible Iron Curtain – the Western Vaccines on one side with the Russian one (with other possible outlier versions) on the other. 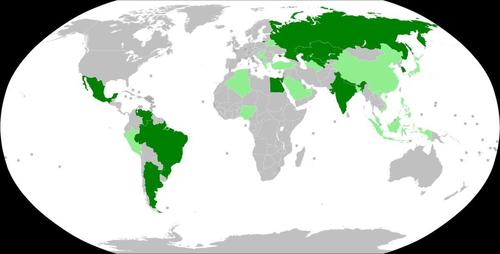 This may sound like a stretch of the imagination but the madness of Russophobic conspiracy theories seems to have no bounds. And most importantly governmental reactions to the Covid-19 Pandemic have been harsh, dubious in effect, and very short sighted. There is a real chance that in 2021 we will see the rise of the geopolitics of vaccination.