Quad-Witch Cometh: Here Are The Stocks With The Biggest Call And Put Gamma Imbalance

The highly anticipated Fed meeting is now in the rearview mirror, but for weary traders sitting at a fresh all time high in the S&P, the week is not yet over as another major market event is on deck: we are talking about Friday’s quad-witch (quadruple expiration) when once a quarter on the third Friday, we get the simultaneous expiration of stock index options, market index options, individual stock company options and and single-stock futures.

At the 30,000 foot level, two things make Friday’s quad-witch especially notable: the relatively small size of Friday’s event, and the dismal liquidity going into it.

As Goldman writes in its latest Vol Vitals report, when measured in contracts (or percent of SPX market cap), the SPX open interest expiring this Friday is the smallest for at least a decade. The 4.0 million March contracts outstanding are just 60% of the open interest at this point in the volatile week approaching March-2020 expiration. According to Goldman, the reduced SPX open interest reflects volume continuing to spread around the calendar instead of being concentrated in just the quarterly expirations. Meanwhile, the rising SPX index level has left the bulk of March open interest (87% has strikes of 3900 or lower) below the current index level, so expect marketwide gamma to have limited impact on trading dynamics this week. 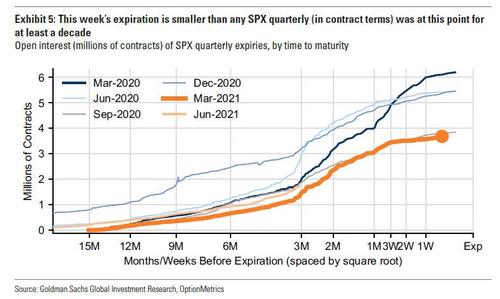 Yet the steep decline in Friday’s op-ex size may be more than offset by a plunge in overall market liquidity, with Goldman warning that “E-mini SPX top-of-book has been weaker than we typically see at current volatility levels.”

According to the bank, ongoing weak liquidity is one reason for market nervousness (or, vice versa, a nervous market means there is no liquidity), and ahead of this week’s quarterly futures roll (when liquidity tends be divided between two futures contracts —sometimes making liquidity appear stronger) “top-of-book depth was weaker than usually seen at the current level of volatility.” As shown in the chart below, so far in Q1 top-of-book depth when the VIX is in the 20-25 range has been weaker than seen in the same VIX range in 2H2020. And, as Goldman warns, “while markets have successfully absorbed larger-than-usual futures and options trading volumes in recent weeks, diminished top-of-book depth can become impactful again the next time markets sell off.” 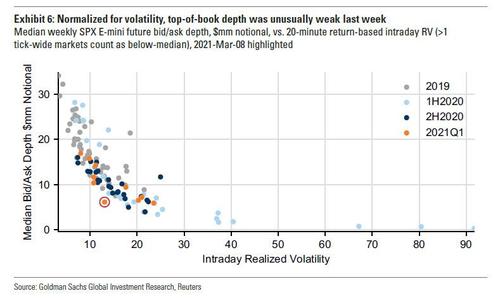 So while on one hand we will have a trade off between a smaller op-ex and a more illiquid market with unpredictable consequences, one thing is certain: at the individual stock level, the effect of gamma imbalances will be just as acute as always. To evaluate which stocks are most susceptible to upside and downside “pins”, we go to JPMorgan which has screened for prominent call and put imbalances among option liquid members of the S&P 500. The results are shown in the charts below showing stocks with notable call and put imbalance positioning.

Some more from JPMorgan:

Following the January FOMC meeting, we witnessed broad market volatility with equity markets closing notably lower (e.g., SPY -2.4%, IWM -1.8%, QQQ -2.8%, VIX +14.2 pts or +61.6%). Long duration assets continue to slide given Powell’s view on any potential near-term rise in inflation as transitory and his desire for “patience” disappointing bond investors. Since the January meeting, the TLT is down 11.1%, the LQD is down 5.3%, and 10Y TIPS Breakevens are at a 7-year high. The January meeting volatility, and more recently the market’s reaction to Powell’s March 4th comments (SPY -1.2%, IWM -2.8%, QQQ -1.6%, VIX +1.9 pts or +7.1%), are reminiscent of the period in 2018 when Fed Chair Powell’s speeches resulted in a string of related equity market declines. Our prior analysis found that this was likely a result of the equity market’s assessment of the economy and various risks not aligned with the Fed. More specifically, the equity market implied that the Fed was underestimating various risks, and hence increasing the implied probability of the Fed committing a policy error in the future. Arguably, a similar concern and debate as we have today (i.e., inflation & rate hike timing).

Of course, in retrospect, Powell did everything today to avoid giving the markets the impression that he is making a policy error now even if it means he will make a far greater policy error in the future when the Fed’s belated tightening cycle finally catches up with market expectations, sparking a full-blown market crash.

But while the Fed is unlikely to be a repeat catalyst for single-name gamma, Friday’s op-ex will be. As JPMorgan elaborates, a single stock gamma imbalance alone is often insufficient to spark a fragility event as under a normal operating environment these imbalances are typically hedged by dealers. However, “low liquidity environments do lay the groundwork for dealer positioning that can exacerbate existing market trends and volatility, particularly around potentially high-impact events (e.g., FOMC) in close proximity to expiration.”

JPM then brings our attention to Figure 1, and specifically Call Imbalance members GM, RL, MMM and ABBV, and Figure 2. Put  Imbalance members QRVO, ADSK, CHTR and LRCX, all of which moved greater than +/-5% following the January FOMC meeting, despite the beta of these stocks to the S&P 500 averaging 1.12, and the SPY closing down 2.4%.

So without further ado, here is JPM’s list of the 15 stocks with a prominent call imbalance…

… and the 15 names exhibiting a prominent put imbalance.

Kickbacks, Corruption & Scandal: The History of the CDC