Yesterday, reporters repeatedly pestered President Joe Biden with questions about whether the Senate should kill the filibuster (one reporter asked why Biden and the Senate would allow a “relic of Jim Crow” to remain, to which Biden replied that “electoral politics is the art of the possible”). As progressives wonder whether more moderate Dems will join their “end the filibuster” cause, it looks like President Biden has found another way around the problem of securing enough boats to pass his agenda (while keeping progressive moonshots like the Green New Deal out of reach). 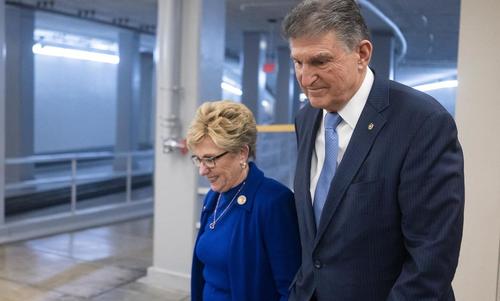 Bloomberg reports that Biden is planning to nominate the wife of West Virginia Sen. Joe Manchin, a conservative “Blue Dog” Democrat and a critical senatorial swing vote, to a “regional economic development position.”

President Joe Biden plans to nominate Gayle Conelly Manchin — an educator and the wife of Democratic Senator Joe Manchin, a key swing vote — to a regional economic development position after the lawmaker has emerged as a key swing vote in the chamber.

The White House said Friday that Gayle Manchin is Biden’s pick for federal co-chair of the Appalachian Regional Commission, an economic development partnership between the federal government and 13 states, including West Virginia, where the senator and his wife reside.

Manchin and his wife have been married for more than 50 years. Their daughter, Mylan CEO Heather Bresch, made headlines back in 2016 when her company jacked up the price of epipens.

As BBG reminds us, Manchin is “the foremost Democratic swing vote in the chamber.” Since the Senate is evenly split between the GOP and Democrats, VP Kamala Harris must be relied upon to cast the tiebreaking vote. But when Manchin votes with Republicans, he can single-handedly stymie the Democratic Agenda. This ability has earned him the ire of progressives. which is evenly split between the parties but is controlled by Democrats because Vice President Kamala Harris breaks ties. As a result, Manchin holds significant sway in Biden’s ability to pass legislation.

It’s pretty clear what Biden is doing here: while BBG points out that Gayle Manchin is technically qualified for a position like this – she “served previously on the State Board of Education, and chairs Reconnecting McDowell, an initiative in West Virginia run by the American Federation of Teachers. She also served as secretary for the West Virginia Office of Education and the Arts and holds two graduate degrees” – the timing factor is hard to ignore.

For the past few weeks, Manchin has been telling reporters he wants Democrats to push through Biden’s upcoming $3 trillion infrastructure/climate package through regular order instead of through reconciliation, a budget process that would allow a mammoth infrastructure package to pass with just 50 votes by circumventing the fillibuster. Maybe now, Manchin will keep quiet, and simply show up to vote when the time comes.

Manchin has already flexed his newfound power in Washington. He has already successfully scuppered one of Biden’s cabinet nominees, Neera Tandan, who was nominated for OMB chief.

Another example of corruption..they don’t even try to hide it anymore
RT @ScottJW: So, the odds Joe Manchin caves on the filibuster just went up. | Biden Names Wife of Pivotal Democratic Senator for Federal Post https://t.co/KwiUT6hWYI

Is this how you bribe a senator?

Restaurants In Lockdown-Loving, High-Crime Cities Still Reeling While Others Thrive