The effects of the virus pandemic and socio-economic implosion that followed compounded with failed liberal leadership could soon transform San Francisco into an empty ghost town.

Such is the case with pharmacy giant Walgreens fleeing the metro area amid a rash of shoplifting. Since 2019, Walgreens has closed ten stores in the city, with the latest store set to close later this month. The closure is the third since October 2020.

According to Washington Examiner, the Walgreens at the corner of Bush and Larkin streets posted a notification on their front windows announcing the closure on Mar. 17. 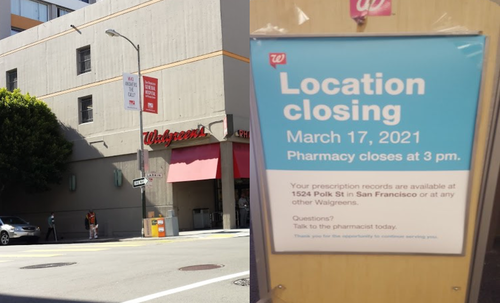 “All of us knew it was coming. Whenever we go in there, they always have problems with shoplifters,” a regular customer, Sebastian Luke, told the San Francisco Chronicle.

Last October, a news reporter with Inside Edition captured the moment when a man jumped over a Walgreens counter and stole an air bed. The video shows the man taking off on an electric scooter as he escaped without any intervention from employees or customers.

“I feel sorry for the clerks, they are regularly verbally assaulted,” Luke said. “The clerks say there is nothing they can do. They say Walgreens’ policy is to not get involved. They don’t want anyone getting injured or getting sued, so the guys just keep coming in and taking whatever they want.”

At one location, the San Francisco Chronicle said it loses about $1,000 per day in merchandise because of shoplifting.

San Francisco Chamber of Commerce told SFGATE that complaints of shoplifting at drugstores are “frequent.”

Theft of less than $950 in goods is treated as a nonviolent misdemeanor under California law. But in most cases, for shoplifting, the criminal is released.

The San Francisco Police Department told the Washington Examiner that it is “aware of incidents of retail theft where groups of suspects enter stores, grab product and merchandise and flee.”

… and with the exodus of city residents, the decimation of small and medium-sized enterprises (due to pandemic), and soaring socio-economic problems in the metro area, San Fran could one day be a hallowed out town, sort of like Baltimore and or Detroit if these trends persist.

CPI Jumps In Feb, BLS Admits It’s Making Most Of It Up

Grace Walden, a Martyr for Truth