Rates Are Blowing Out: A 1% Increase In 10Y Yields Will Slash P/E Multiples By 18%

As Bloomberg macro technician William Maloney writes this morning, after a lengthy period of meandering, the yield on 10-year U.S. Treasuries spiked above 1.0% and hit 1.052% amid an ascending triangle breakout, signalling a further rise could be on the way. According to Maloney, the breakout could set up a run to 1.09%, which is 76.4% Fibonacci of the March 19 peak to August low. 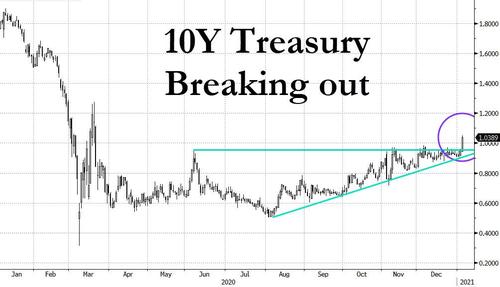 The reason for the breakout, as discussed earlier, is simple: the Docratic blue sweep which now appears likely paves the way for more spending, much more stimulus and a gaping budget deficit, pushing inflation expectations and nominal yields sharply higher. Indeed, long-bond rates were on track for their biggest one-day jump since March’s pandemic-related turmoil and investors have already started to dust off reflation trades in anticipation of a so-called Blue Sweep.

“The result will certainly be seen as a driver of higher Treasury yields,” said James Athey, a money manager at Aberdeen Standard Investments. “The reflation trade has already been sparked. The question really is how much further the Senate result will push that.”

“I can see 10-year Treasury yields rising to 1.5% to 2% in short order if more and more uncertainty gets behind us,” said Vishnu Varathan, head of economics and strategy at Mizuho Bank in Singapore.

To be sure, while a continuation of the move higher in yields is guaranteed, the reason why markets remain sanguine about a major, VaR-shock inducing move – one which would risk to violent deleveraging among the risk parity funds and hammer risk assets  – is because the Fed has previously telegraphed it would step in with some form of Yield Curve Control to prevent just that from happening.

But what if the Fed is willing to let yields run? What if inflation is about to be unleashed and the next stop for the 10Y is not 1.50% but 2.0% or even 3.0% or more? What will happen to stocks then?

For the answer we go to the latest note from Morgan Stanley’s Michael Wilson, who warned that surging yields is the biggest risk the market is unprepared for, and made some ominous observations. We excerpt them below:

As we peruse the financial markets today, we can’t help but notice one major outlier to the constructive economic story line that has now been adopted by most investors: long-term bonds/interest rates. No other asset in the world is as mispriced for even the modest increase in growth/inflation that is expected. Based on some simple relationships with stocks, commodities and economic growth projections, the 10-year US Treasury yield appears to be at least 100 basis points, or 1%, too low.

This is a crucial consideration for investors because every asset in the world is dependent on the 10-year US Treasury yield. It is the pricing mechanism for all long-duration financial and real assets—equities, credit, real estate and commodities. In other words, while better economic growth positively affects the value of these assets, low long-term Treasury yields play just as big of a role, if not bigger.

Using the S&P 500 Index as an example, an increase of 1% in the 10-year US Treasury yield from current levels would lead to an 18% decrease in the price/earnings multiple (P/E), all else equal. For the Nasdaq 100 Index, such a rise would equate to a 22.5% decline in the P/E. While such an abrupt increase in interest rates is unlikely, we wouldn’t rule it out. The point here is that asset prices are looking rich at the moment given the upside risk to interest rates and very low chance they fall further in the absence of some bad economic developments

So what are the odds of this “worst-case scenario” where yields move sharply higher in a very short period of time? According to Wilson, the answer is quite high:

While there is still very good potential upside for many of the stocks we like in this new bull market, one should be prepared for an adjustment in valuations lower as interest rates catch up to what other asset markets have been saying for months. If this adjustment is gradual, then stocks and other assets will likely go sideways for a while until earnings eventually take them higher.

However, should that adjustment in rates occur more rapidly, all stock prices will adjust lower, perhaps sharply, rather than just go sideways.

We suspect such an adjustment is more likely than most if we are right about growth and inflation surprising further on the upside.

Bottom line: rates are going higher, perhaps as much as 100bps higher. The only question for stocks is whether this move will take place in months, or days: that will make all the difference if the next move in stocks is higher or much lower…

L.A. County Tells Residents To Wear Masks Inside Own Homes

“All Hands On Deck” – Up To 25,000 National Guard Now Authorized In DC For Biden Inauguration