Recipe For A ‘Gong Show’

Authored by Charlie McElligott via Nomura,

We had spoken in the note for a long while now about tail hedgers who for months have been moving away from their 2020 play of “bear-steepeners,” which were the obvious eventual beneficiaries of the “renormalization reflation / blue wave-lite enhanced fiscal stimulus and govt spending largesse” convergence, likely then “shocking-out” legacy lazy-longs in the “Everything Duration” trade—i.e. the long-end sells off the most on enhanced “growth- and inflation- expectations”

But since late last year / start 2021, what instead were tail funds moving into?  We explained that they had more recently been loading into “bear-flatteners,” with instead the FRONT-END / INTERMEDIATE SPACE then the most likely repricing points and coming un-pinned from policy adjustment, playing for a scenario where the market anticipated the Fed needing to tighten FAR ahead of schedule (moving from ’24 to ’23 and beyond), and they would do that via tapering of QE—which would disproportionately impact the belly of the UST curve

And there were other “canaries in the coal mine” too, besides the aforementioned tail-hedger flows pivoting from “bear-steepeners” into “bear-flatteners”…

Taking a step back and to the point of the past notes then, I then tied this potential for Rates dis-ease back to the implications it could have on a cross-asset market that had been taking its cues over the past year from the direction of real- and nominal- yields and the shape of the UST yield curve…particularly with implications in Equities risk-premia / factors and thematic trades, when we have still see so much legacy-positioning crowded into Equities with heavy interest-rate sensitivity

This would only get hairier then when I noted last week that “duration- / UST- proxy” legacy longs in “Secular Growth” Tech would be at massive risk of an enormous “Gamma Unclenching” following last week’s Op-Ex, due to reduced Dealer hedging needs around expiring QQQ (Nasdaq) options positions…and into a VERY precarious paired of almost all-time high in QQQ $Delta vs a very historically signficant negative $Gamma position…and in peak-perversion, alongside a Rates / USTs VaR-event

And this is the why & how the (Bond proxy) Nasdaq dragged down the entire Equities complex yday in painful-fashion, now with QQQ $Gamma now ranking at 0.5%ile and QQQ $Delta at 0.2%ile

From here, Gamma and Delta levels that matter US Eq (and also noting it is important that we’ve now held both the Monday post Op-Ex low and ES1 50DMA on test yday):

And finally, regarding that whole “broken VIX” market thing I’ve been hammering for the past month +?  LOL yeah that’s still a thing, where what had been recently suppressed realized vol due to a stuffed “long gamma” and held in a chokehold at the 3900 strike is now seeing realized vol “crashing-UP” to the elevated forward implied vol we’ve spoken about ad nauseum (due to liquidity, regulatory / structural and macro regime-change reasons)

The realized vol “crash-UP” of the past week (5d from 3 to 25!!!) is now crunching a ton of systematic and vol abitrageurs who’d crowded into VIX rolldown trades due to the enticingly extreme (99th %ile) steepness in VIX futs curve, which then accordingly drove such exaggerated stop-outs in UX1 shorts yesterday as realized exploded higher (big vol outperf vs spot index move yday)….and as previously stated, this matters particularly for a risk-management market-structure (VaR, Target Vol / Vol Control) which uses volalility as the exposure toggle (and leading to mechanical “de-grossing” in a + vol impulse) 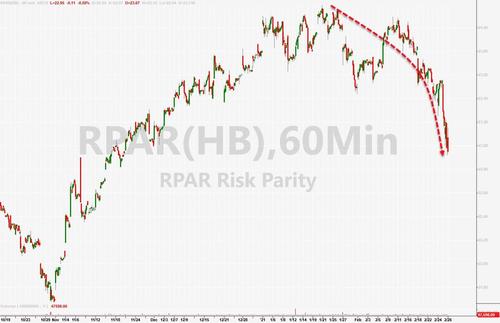 This then sees “shadow leverage” impacts in second-order deleveraging / redemption flows at ETF’s like ARK, with the past three days seeing outflows of -$848mm, -$293mm and -$433mm further leaning like de facto “short gamma”

Good news is that “IF” we can see Vol again stabilize and anybody is able to sell skew / fwd vol ever again (perhaps with help of the Fed, or more realistically if VIX ETNs take profits in longs), we could just as quickly re-leverage—i.e. we estimate that with a daily SPX change of 0% over the next month, Vol Control would mechanically see +$46B of US Eq to buy over 1m; with avg daily chg 0.5% = $37.2B to buy over 1m; and an avg 1% daily change = $16.5B to buy 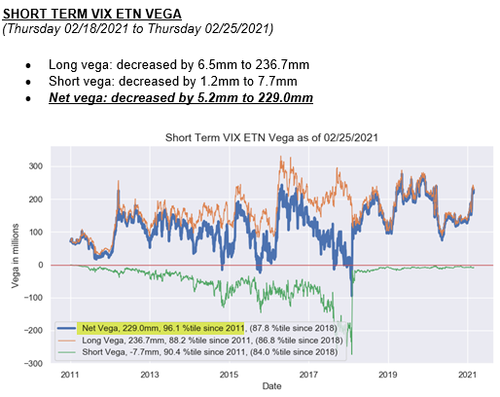 To this highlighted point, we have now strung together a small number of consecutive days of Short-Term VIX ETN “Net Vega” DECREASING, which can ultimately help to alleviate some of that impossible stickiness in forward iVol which we’ve been noting, and help “tip” vol market into a “less broken” place (albeit the overall VIX ETN Net Vega remains 96th %ile since ’11)

Will Surging 10Y Yields Crash Stocks: A Q&A From Goldman