After two average auctions earlier this week, moments ago the Treasury concluded the week’s coupon issuance with the sale of another record-sized batch of 7Y notes. The auction was solid, if once again, nothing to write home about.

The $62 billion auction, $3 billion larger than December’s and the biggest on record…

The internals were a little bit better, with Indirects taking down 64.1%, an improvement to last month’s 60.3% and above the 63.6% average, while Directs took down 16.28% also stronger than the six-auction average, leaving Dealers with 19.6% or just below the 20.4% avg.

Besides that, nothing to note, with the pricing leading to no reaction in the second market. 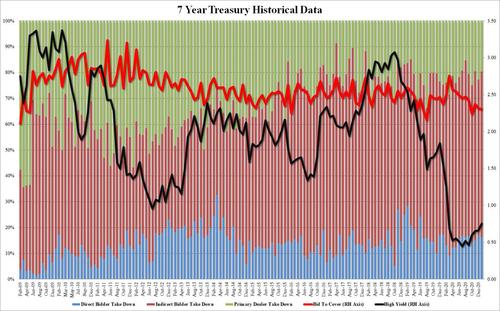 And so, another week of record Treasury auctions concludes without incident despite the ever increasing size of every auction and hitting never before seen levels to keep the US government funded.

Macro Risks To The Stock Market Are Mounting