Record Leverage Means No Policy U-Turn For The PBOC

That seems the thinking behind U.S. President Joe Biden’s economic plan, which now includes a $2.3 trillion spending proposal for infrastructure, green investment and research. Of course, there are still questions about how much Congress can actually deliver, and the spending will be spread out over eight years, meaning the immediate impact on the economy is likely to be less than the headline number suggests. That perhaps explains why Treasury yields increased only modestly Wednesday. The fact that the stock market set new highs suggests that the improvement in earnings is likely to outpace any rise in yields or potential increase in taxes.

Back in China, good economic news continues to be treated as bad news for markets. Despite solid PMI data, the CSI 300 Index fell, making it the only major benchmark to post a loss for the year on Bloomberg’s WEI major equity ranking page. Part of the concern is that policy makers will tighten rates to contain financial leverage. China’s total debt increased 29% points last year to 315% of GDP, driven by companies and provincial governments borrowing during the pandemic, according to Citigroup. 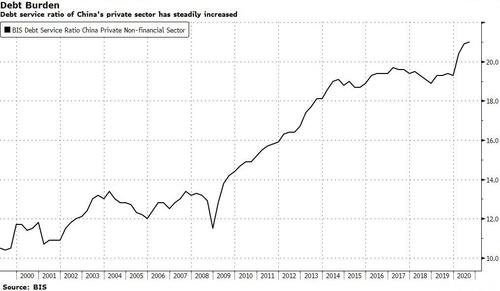 Citigroup’s economists found about 600 listed Chinese companies with leverage ratios 20 points above their sector averages. Their combined market valuation amounted to 11 trillion yuan ($1.7 trillion), or 17% of the stock market. Assuming their debt is mostly financed by banks, every one percentage point rise in the lending rate would boost their interest payments by 152 billion yuan, equivalent to 30% of their profits, economists led by Liu Li-Gang wrote in a note.

Property developers are particularly vulnerable, given their high debt levels and uncertainties regarding regulators’ “three red line” policy aimed at limiting indebted companies’ capacity to borrow. For developers, a rate hike of one percentage point rate will increase their interest costs by 49 billion yuan, or 42% of their profits. 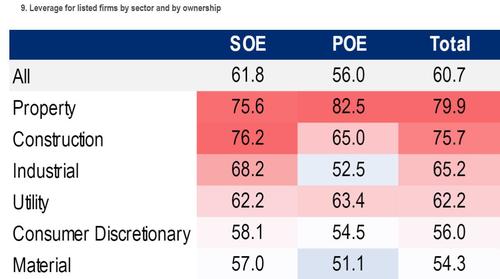 “While rising leverage ratio is a concern, the very factor could also be used to argue for caution when the PBOC starts to exit its supportive monetary policy,” Liu and his colleagues wrote. “If not handled with care, we will not only see the Chinese version of ‘taper tantrum’ in the financial markets, but also potentially witness the rising risk of default from those highly indebted enterprises.”

It sounds like the PBOC will be walking a tightrope from here.

Blain: Failing Global Politics And Inflation Will Be A Nasty Shock