No one predicted that the global shipping container industry would be on fire in the last couple of quarters, considering China’s robust economic rebound following the virus-induced downturn. Container rates have soared since last spring as there are few signs of immediate cooling.

The market for second-hand ships is soaring as the sale of new vessels has sunk in the last couple of years. A typical container ship takes more than one year to build – so boosting new ship supply cannot be readily done – hence why demand increase and value explosions are being observed on the secondary markets.

Clarkson Research Services Ltd. said a 10-year-old container ship with the capacity to haul 6,600 steel boxes fetches about $41 million today – that’s a considerable jump from its $9.5 million value back in 2016.

“The recent price increases have happened far more quickly than previous sales and purchase cycles,” said Stephen Gordon, managing director at Clarkson Research. “Recent prices trends for 10-year-old vessels have more than doubled in less than six months, whereas in 2016-17 and 2004-2005 it took nearly 18 months for similar percentage price increases.”

“February was the second-highest activity on record for transactions measured in ship container capacity,” Gordon said.

Time charter rates for a 6,800-box container ship have erupted.

Container shipping data from Freightos and Harper Petersen & Co show container rates have been surging since April-June of 2020.

Demand for freight containers and the heavy flows from China to the US East/West Coast has resulted in a shipping container shortage in Asia.

In September, we first noted that demand for ocean freight out of China was “leading to equipment shortages in Asia.”

“The surge in volumes is leading to equipment shortages in Asia. Some shippers are paying premiums on top of spiking rates to guarantee containers and space. The imbalance is also putting pressure on overwhelmed US ports and importers to process and return empty containers quickly.”

While the buying frenzy for second-hand container ships continues – we suspect this trend will last until the global economic rebound stalls – with China’s credit impulse already peaking – this could be in the second half of this year. 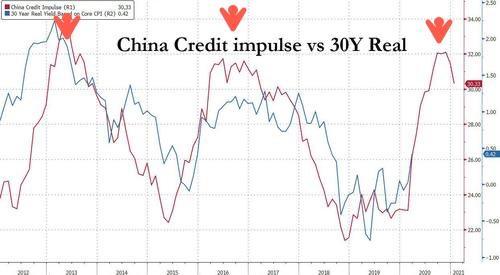 From used cars to used private jets to now used container ships, real asset prices are exploding higher. But how long will this madness last?