Surveying the wreckage of WallStreetBets raid on the silver markets – which thankfully for many on both sides of the trade – never got as out of hand as the heavily-shorted stock malarkey, offers a few insights into just what happened below the surface as silver prices round-tripped up and down by around 12% from Friday’s close. 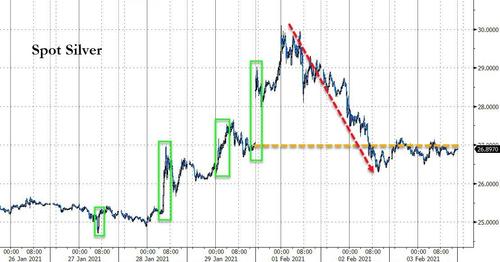 SocGen’s Commodities Research Group note monitored the inflow into this targeted ETF and other major silver ETFs and funds, and found counterintuitively that both saw outflows on 28 January, the first day of the rally.

Over the following two days, 29 January and 1 February, historically high inflows into the iShares ETFs were met by similarly sized outflows from other silver ETFs and funds. 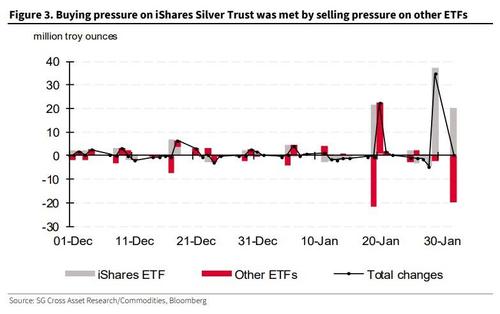 As investors who followed Reddit’s blueprint continued to stockpile ETF shares, other investors sold and probably took profits, with silver having already rallied almost 48% in 2020.

On the price action side of things, the iShares Silver Trust is physically backed and does not directly impact the silver future market.

As shown in the figure below, such changes in open interest are rare. 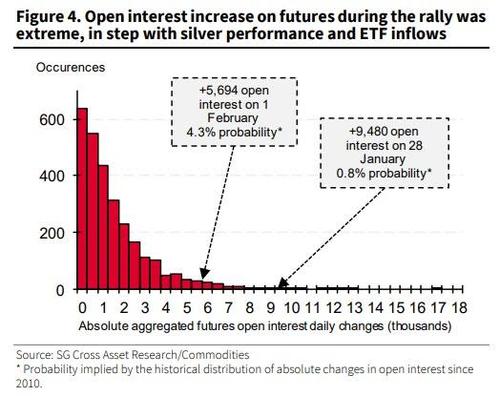 Given that silver ETFs saw outflows on 28 January and the spot price jumped 4.89%, this first leg of the rally seems, in fact, to have been driven by future contracts rather than ETFs.

As SocGen notes, gold and silver tend to never experience backwardation (spot price higher than long-dated forward prices). Such backwardation appears when a commodity market is tight on the short term due to low inventories and/or low current supply. As a result, large commodity consumers have an incentive to pay a premium to secure short-term deliveries, known as convenience yield.

In the chart below, we define the front end of the silver forward curve as being ‘in backwardation’ if the 4-month time-spread is positive. 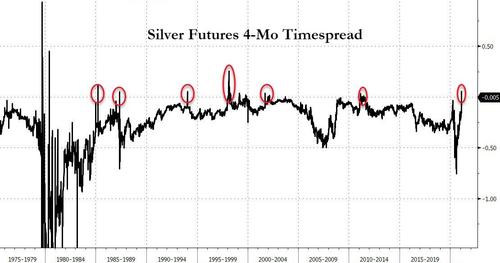 As discussed above, this is very rare and has happened on only 18 days since 2000 and only twice has the time-spread exceeded $0.02/oz.

This makes 1 February’s $0.057/oz time spread an outlier and the second-steepest backwardation observed on the front-end of the silver forward curve since 2000.

This exceptional situation may have happened as Swiss coins sellers were reportedly overwhelmed by online purchases of silver coins.

To meet their delivery,they paid a premium to secure quick access to rebuild their silver inventories.

Since then, the market has normalised and as of 2 February close, the silver 4-month time-spread was back in negative territory. 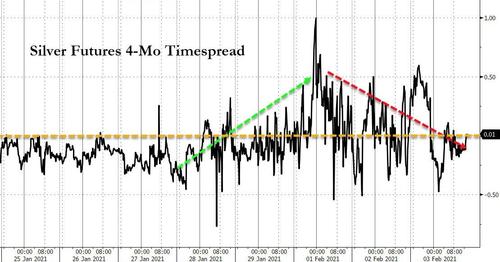 SocGen concludes with some calming tones, noting that gold and silver have huge above-the-ground stocks in the form of bars, coins, jewellery or silverware. These large inventories are often used as store of value and exposed to opportunistic sales when the price rises. This means, in SocGen’s words, that a shortage of precious metals is very unlikely as supply can instantly flow in if prices move high enough to incentivise precious metals sales.

However, while SocGen does a great job explaining the mechanics of what happened, back in the real world of supply and demand, US Mint prices for silver coins remain at an extreme premium to paper prices… 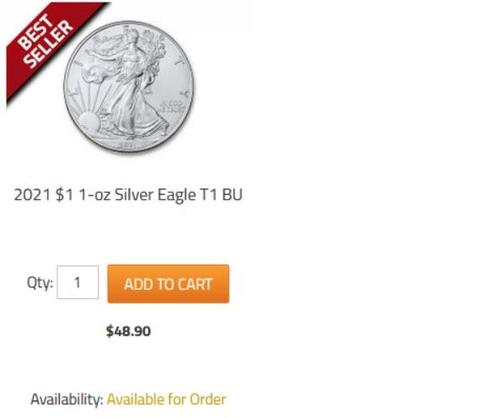 As it admits, albeit subtly, that it’s unable to meet demand.