“Ripe For Accidents” – Nomura Warns, Something Is “Broken” With The VIX

The past weeks has seen an odd bifurcation in the VIX term structure, with spot tumbling after the reddit short squeeze phenomenon fizzled as hedge funds re-grossed even as the rest of the VIX curve remains surprisingly sticky… and high. 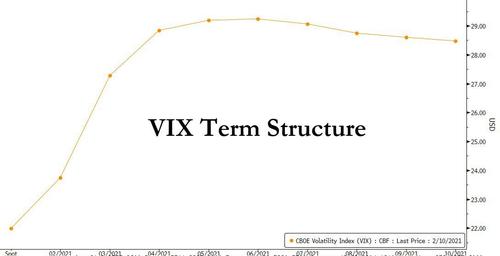 In his latest note, Nomura’s Charlie McElligott discusses the two sets of distinct factors that are behind this divergence, starting with spot, where he says that after we had seen the vol market really only pricing “chop” to outright “crash-down” prior to the past week with action dominated by puts, we are starting to now see investors increasingly grab for “crash-up” in the index too (i.e., VIX moving higher on call buying), where after seeing 0%ile 3m SPX upside call skew just two Fridays ago “we now see to a move higher to ~30%ile SPX upside call skew since as the upside got really cheap.”

This is why he thinks there probably “isn’t a lot lower to go in implied vol from here” anchoring the front VIX at 20-22, and instead we are more likely to reprice higher into a tape breakout higher – as yet another marketwide gamma meltup emerges “and this grab into index upside tails is turning vol-of-vol VVIX higher again too.” 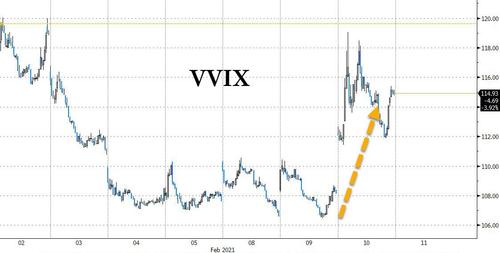 To summarize Charlie’s view on spot, he things the “big thing we need to watch for then is a potentially imminent return to “spot up, vol up” market where investors keep grabbing at upside”… which would probably be your market top signal to reduce risk “under the potential for a short-gamma “crash up, crash down” accident with potential to gap down under the weight of its own delta” (see “Sometimes They Ring A Bell At The Top”: Why BofA Expects A 5-10% Q1 Market Correction“)

McElligott also lays out several other reasons why forward vol remains so sticky-bid (with a huge divergence between implied and realized vol as March through Summer VIX are all 28-29 – see chart top – while SPX 5 day realized sits at 6.3 vols – including:

Incidentally, a similar point was made by Dylan Grice in late January, who noted that “vol sellers were so wiped out in March there’s no one left to sell. That means tail protection is expensive. Even if you did want to short this market (I think you don’t) there isn’t a cheap way of doing it.”

The take home message from the above is to keep an eye on a spike in VIX which would be an advance indicatior of imminent “froth overflow.” What about the rest of the extremely steep VIX curve?

Were McElligott chimes in again, writing that “it is this extreme steepness in term-structure (SPX 1m at 90th %ile), which has thus seen the entire Vol world playing this with “roll-down” that is the reason that twice now in the past week, we’ve seen laughably-small moves in spot Spooz generate full Vol point + moves in VIX futures “as panicky short-cover flows follow thereafter from said “roll-down” players, as well as the fact that short-dated options are the only thing which Street dealers are able to be short in the first place.”

To the Nomura quant, “this then means that the “broken” VIX market will continue to act as a source of “fragility” and leave the environment ripe for accidents, in a market-structure where volatility and the exposure / leverage toggle.“

BREAKING: DNI Ratcliffe Releases Report Showing China Interfered with the 2020 Election and CIA Management Pressured Analysts Not to Report It

Hundreds Of Pieces Of Fine Art, Worth Millions, Rushed Out of U.K. Ahead Of Brexit Cutoff

WAYNE ROOT: A Christmas Message for President Trump: You Must Win Now, You Can’t Win in 2024