The title of this post seems rather obvious in light of this week’s events, but it’s something we have been talking about for months now. Rising interest rates are not kind to tech stocks. Rising rate volatility is not kind for tech stocks. And, rising inflation is not kind to tech stocks. Application of Occam’s razor would have us tuning into the duration aspect of tech shares as being the most likely culprit. Indeed, the longer the duration of an asset, the higher sensitivity of that asset to interest rates (and by extension, inflation). Tech shares sport the longest duration among all equities since so much of the cash flows are realized only far into the future. Stocks with no current earnings this year, or next year, or the year after, are therefore particularly sensitive to changes in interest rates. So it’s no surprise that new IPOs (many of which are tech related) are on average down a cool 15% from just a few days ago.

Anyhow, it’s fair to say that valuations for technology stocks are heavily predicated on long-term interest rates remaining low. In the below chart we plot the forward PE ratio for the Nasdaq 100 on the left axis in red and overlay the 30 year Treasury yield in blue on the right, inverted axis. Since rates troughed last summer, tech valuations have moved from 34x earnings to 28x earnings. 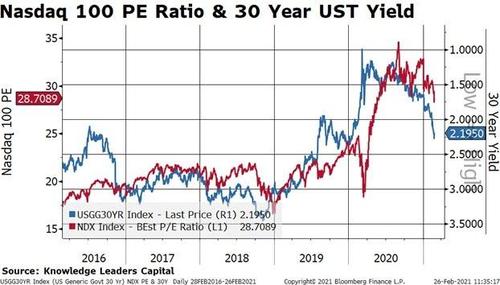 Volatility of interest rates is also a factor that plays into the valuation of duration sensitive assets, like technology stocks. Indeed, a more volatile longer term interest rate means rates will trade in a wider band, with higher rates increasing in probability. Interest rate volatility as measured by the MOVE index (in red) climbed from an average of 45 from November to February and then shot up to 74 over the course of a few days. Since rate volatility started to increase, tech shares (in blue) have sold off by 7%, leading market declines. 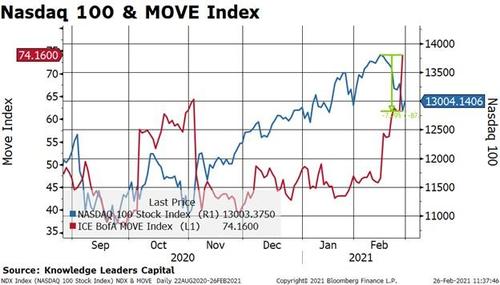 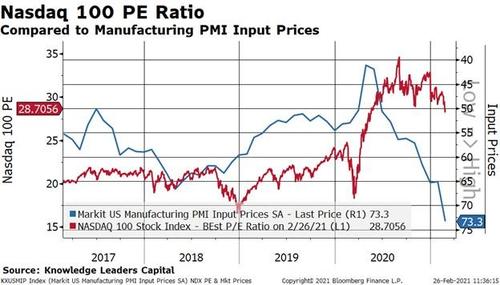 The relationship between rates, inflation and tech valuations are of specific concern to markets since the expanded tech sector now accounts for roughly 40% of the S&P 500.

In other words, if tech needs lower rates/rate vol/inflation to sustain valuations, then the equity market as a whole needs lower rates/rate vol/inflation to support valuations…and prices of major benchmark indexes. This week was not a good showing in that regard. However, Fed Chair Powell will have an opportunity to throw his hat into the ring next Thursday. We will be focused on whether he reiterates, or not, the Fed’s commitment to low rates far into the future.

Looser As We Get Tighter?