Authored by John Authers via Bloomberg.com,

Fortune favors the bold. And blessed are the meek for they shall inherit the Earth. Both those things came true simultaneously in 2020.

The following chart, from Ian Harnett of Absolute Strategy Research in London, shows the performance of two broad proxies for “risk-on” and “risk-off.”

The risk-on basket smooshes together copper, global equities, the Australian dollar and high-yield bonds, while the haven, or risk-off, basket has gold, Treasury bonds, the Japanese yen and Treasury inflation-protected securities, or TIPS.

Amazingly, these very disparate investments performed almost identically to each other. Both baskets enjoyed a fantastic year, gaining almost 20%. 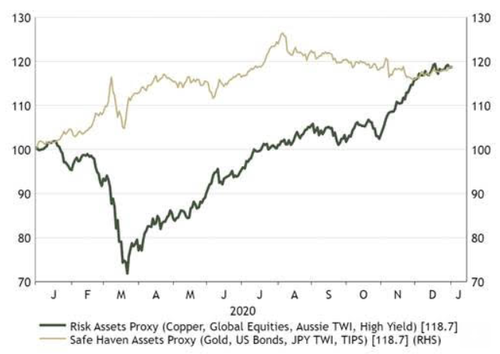 Harnett sent this to me as I was trying to digest the weirdness of a day with elevating stock market volatility as the bond market stayed preternaturally calm. In the first few years of the global financial crisis and its aftermath, we all grew used to the phrases “risk-on” and “risk-off” as whole asset classes would move according to top-down views of whether risks arising from the crisis were rising or falling. Now those rigid definitions are breaking down.

I prodded Harnett for more. The next chart confirms that for a few years after the crisis, the two tended to move in starkly opposite directions. However, 2020 doesn’t look like the historic year one might expect, given the shock that occurred. Risk-on and risk-off assets performed to a more coordinated extent than ever before, but in both cases they did only slightly better than in 2019: 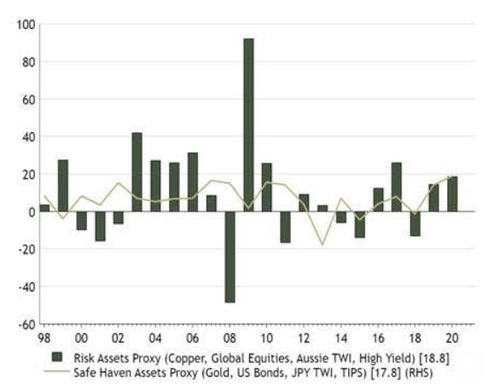 Meanwhile, if we look at cumulative returns for the post-crisis decade, we discover that the “risk-off” basket has outperformed almost throughout. This against the backdrop of a decade that saw an almost uninterrupted bull market in stocks: 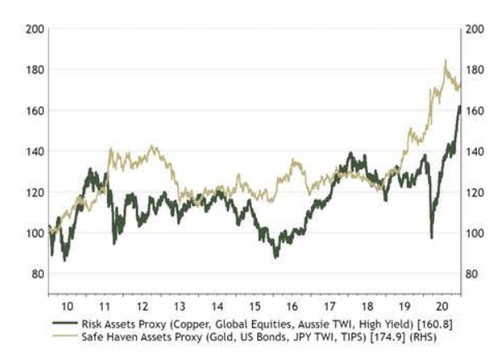 This might help to confirm the intuition that stocks need bonds, or low-risk assets in general, in a way that did not use to be the case. Caution has prevailed for a decade, but created the conditions in which investors felt that they had little choice but to buy stocks and other risk assets. Thus both did excellently.

To ram that point home, note that stocks peaked relative to bonds (as proxied by two popular exchange-traded funds) in October 2018, and have never revisited that high. (I hope and believe it is a coincidence that stocks topped out on my first day of work for Bloomberg.) Since then, equities have gone on to hit records — but they still haven’t done as well as bonds. 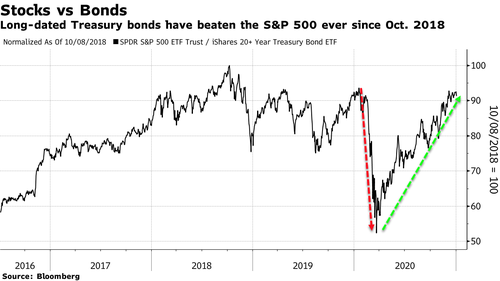 Something strange has been happening to the relationship between risk-on and risk-off in the last few months, and that can be shown in the link between bond and stock volatility (as popularly measured by the ICE BofA MOVE Index and the CBOE VIX index). Generally, as the following chart shows, they tend to move together, which makes perfect sense. 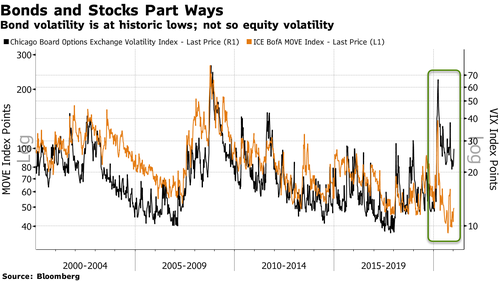 Any given shock is likely to have a big effect on both stocks and bonds, even if it pushes them in different directions. But in the last few months bond volatility has dropped to its lows for the century, while stock market volatility remains elevated.

It is too easy to blame the Federal Reserve and other central banks. They’ve been pumping money into bonds as a means of propping up stocks for most of the last decade, and this phenomenon has only emerged in the months since the pandemic hit. To illustrate how sharp the divergence is from previous history, here is the VIX/MOVE ratio, as graphed by Harnett of Absolute Strategy: 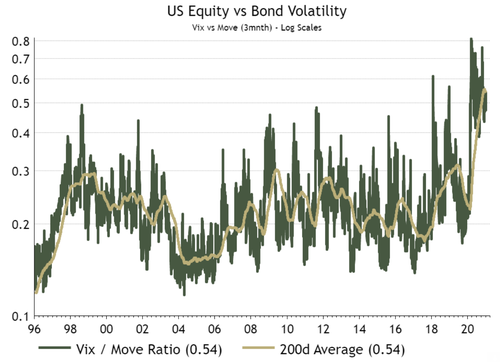 And here is the spread of bond volatility over equity volatility, as cooked up by me on the terminal: 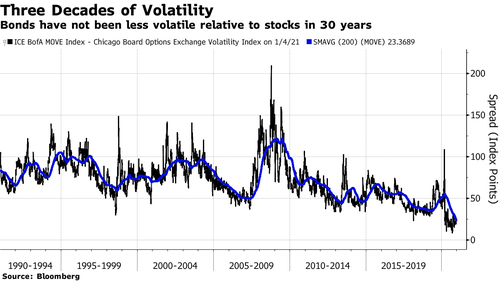 Bonds’ remarkable placidity continues. With nominal yields staying stubbornly below 1% even as inflation expectations return to normal, the result is historically low real yields. This is good news for gold (up on Monday) and awful news for rate-sensitive sectors such as financial and real estate (down a lot to start the year). Such low bond yields allow stocks to keep rising, and also let them exhibit unusually high volatility, to reflect the risks that still abound, without undermining the overall positive environment.

All of this is happening even as the Fed publicly eschews deliberate “yield curve control,” or targeting a specific level for the 10-year yield as the Bank of Japan has done. While bond market volatility stays this controlled, risk-on assets can continue to party. But they also have to absorb any differing risk climate because the bond market is no longer doing so.

Strange days indeed, as someone once said.

Also strange: As Harnett shows in this chart, overall bond market volatility over the last three years has actually been very elevated, as the 10-year yield pierced 3% and then barely 18 months later dropped below 0.5%: 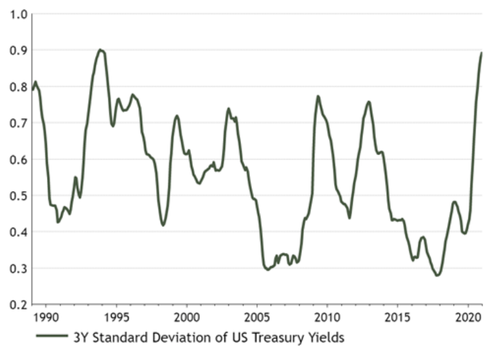 Bonds’ lack of volatility is a sudden and recent development. A lot depends on whether it can continue. A Democratic sweep in Georgia would put it to the test.