“Roadable Aircraft” Could Finally Get Off The Ground In New Hampshire

The most promise for a “flying car” that would be both road-worthy and air-worthy came in January of this year when Woburn, Massachusetts-based Terrafugia received a Federal Aviation Authority airworthiness certificate. But, as Bloomberg notes, by February, it appears hopes were dashed when the company laid off 43 employees and stated it was working on a “new endeavor”.

For right now, New Hampshire appears to be the only state that is keeping the dream of flying road vehicles alive. New Hampshire “became the first U.S. state to make flying cars road-legal” thanks to a bill being called the “Jetsons bill”. If the machines pass testing with the FAA and owners pay a $2,000 fee, their drivers/pilots are welcome to drive them to the airport – before taking off into the sky in them.

The state is known for its liberal transit laws – motorcyclists don’t need helmets and cars don’t require seatbelts. “Live Free of Die,” the state’s license plates read. Terrafugia has been performing test flights in the state since 2018. Company Pal-V also sells one product, called the Liberty, out of the airport in Manchester, New Hampshire.

Kevin Colburn, vice president and general manager of Terrafugia, said New Hampshire’s bill “opens up interesting possibilities for leisure trips to islands.” He continued: “The time savings in a place like New Hampshire, where the mountainous topography makes for some very indirect and lower-speed driving trips could be substantial.”

“You need to build something that’s safe both in the air and on the ground. In the air, you want to minimize weight, and on land, you need to be crash-proof if you hit a brick wall. It’s a matter of threading the needle,” Colburn said. 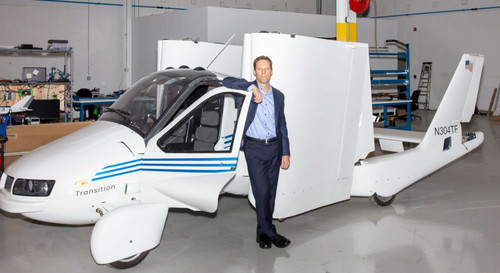 But New Hampshire could be the place where it happens. “I can see a lot of developers going there to test roadable aircraft,” said Laurie Garrow, an urban and regional air mobility specialist at the Georgia Institute of Technology.

Keith Ammon, a sales rep for Pal-V, helped write the Jetsons bill. He said of his company’s Liberty: “It’s a gyrocopter. The power goes directly to the blades. The blades fold up, and on the road, it’s three-wheeled, meaning you can lean into the turns like a motorcyclist.”

The Liberty costs $390,000. Ammon is part of a group in the state called the “Free State Project” that aims to “establish residence in a small state and take over the state government.” The libertarian thread through the state could encourage continued innovation and experimentation.

Hybrid road/air vehicles are attempting to come of age right at the same time as electric Vertical Take-Off and Landing vehicles (eVTOLs). eVTOLs are best known as flying taxis – an industry that Morgan Stanley predicts could reach $1.5 trillion by 2040. Names like Porsche and Boeing have already teamed up on eVTOLs. Terrafugia’s owner, Geely, is also working on them with Tencent.

Comparatively, roadable aircraft can seem clunky. But don’t count the spirit of innovation in New Hampshire out. “When I read about Terrafugia’s layoffs, it blew my mind,” Ammon said. “But this industry has taken a long time to get off the ground, and we will move forward.”

He concluded: “We’re not ants in a colony. It’s important that we recognize the spirit in each individual, and it’s important that we give people choices. Libertarians are not selfish because they want each person to explore their own eccentricities, their own creativity. If everyone can do that, we’ll have a more free and happy society.”

What Did Pelosi Know, & When? Bipartisan Support Builds For 9/11-Style Commission On Capitol Riot

The Great Nonsense Of “The Great Reset”