Robinhood App Plunges Back To One-Star Amid GME Debacle

The Robinhood app on the Google Play Store on Tuesday morning is back down to a one-star rating — and it appears this time Google isn’t going to delete one-star reviews to save the troubled discount brokerage app.

As of 0900 ET, the Robinhood app on the Google Play Store has a one-star rating with over 313k reviews. 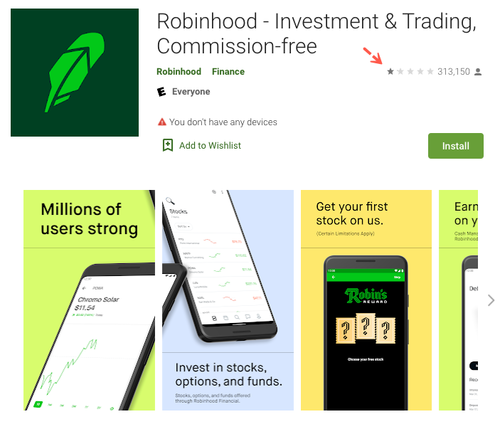 We noted days ago, Google deleted over 100k one-star reviews amid the company’s decision to restrict purchases of GME, AMC, and other stocks. This time it appears Google isn’t coming to the rescue as one-star reviews are overwhelming.

Here are what some Robinhood users had to say:

“App is ok. Fairly well designed GUI, but the company behind it is shady and self-serving. The “no fees” thing means the user is the product. They sell your trade flow. Try calling them – can’t get a live person on the phone. They closed my positions on the day of expiration hours before market close…,” Robinhood user Matthew Lawrence said.

Matt Delvecchio, another user said, “App crashes when there is market volatility, exactly the moments when you need access to your account the most. The company doesn’t seem to care about fixing it’s back-end issues. There have been multiple times that their network has gone down and they seem to do nothing to fix it or prevent it from happening.”

“They feed our transactions to hedge funds so they can make plays based off that data, and when we figure out the game they lock us out, saving them losses by putting those losses on the user of the App Two days in a row this App doesn’t work on days the markets have surged. I have lost so much money because of these two days!” said Felix Tsatryan.

Still, Robinhood is only allowing “limited buys” of various stocks as the company has been bailed out with billions of dollars over the last few days to fund capital shortfalls due to catastrophic risk management and disastrous back-office operations. In an open letter to customers, Robinhood tried to cover up its capital deficiencies by telling everyone the new capital is “to invest in record customer growth”…

… and we know the whole “growth” narrative by the company is malarkey as internet search trends of “delete Robinhood” surge to record levels in the last few days. 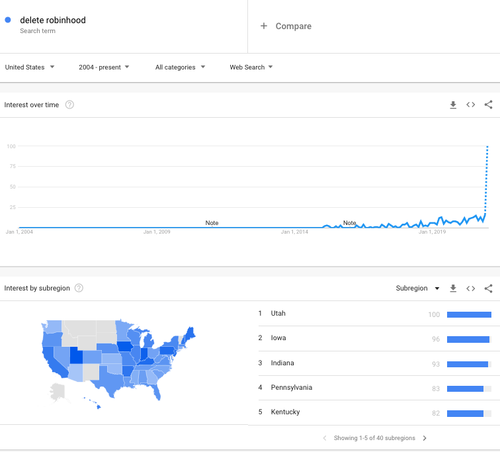 One-star reviews and what could very likely be the beginnings of a mass exodus of the trading app has, as we noted this week, postponed the company’s IPO.

Instead, Robinhood CEO Vlad Tenev could testify before the House Financial Services Committee on Feb. 18 as lawmakers probe the company’s decision-making to restrict customers from trading GME.

The Mechanism of Invisible Empire﻿

BREAKING: Patriots Have Made Their Way INSIDE THE CAPITOL — Pence Evacuated, Lawmakers Sheltering in Place (VIDEOS)