A day after a regulator in Massachusetts filed a complaint against Robinhood alleging the company has “aggressively marketed to inexperienced investors and failed to implement controls to protect them,” one of the trading app’s units has agreed to pay $65 million to settle Securities and Exchange Commission allegations that the broker failed to properly inform clients that it sold their stock orders to high-frequency traders and other financial firms. 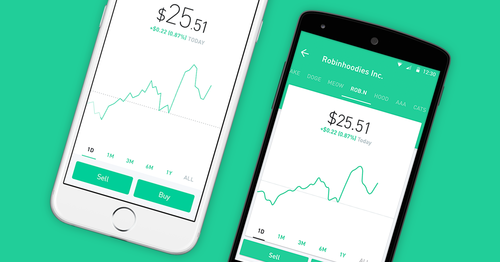 The case involves disclosures from 2015 to late 2018, according to a Thursday SEC statement. The company said it is now fully transparent in its communications with customers about how it makes money.

“The settlement relates to historical practices that do not reflect Robinhood today,” said Dan Gallagher, the firm’s chief legal officer.

“We recognize the responsibility that comes with having helped millions of investors make their first investments, and we’re committed to continuing to evolve Robinhood as we grow to meet our customers’ needs.”

As the SEC’s order finds, one of Robinhood’s selling points to customers was that trading was “commission free,” but due in large part to its unusually high payment for order flow rates, Robinhood customers’ orders were executed at prices that were inferior to other brokers’ prices.

As a reminder, Zero Hedge got in trouble precisely for this, reporting on numerous occasions that Robinhood was selling orderflow to HFT firms like Citadel, effectively allowing the trading titan to frontrun retail investors: 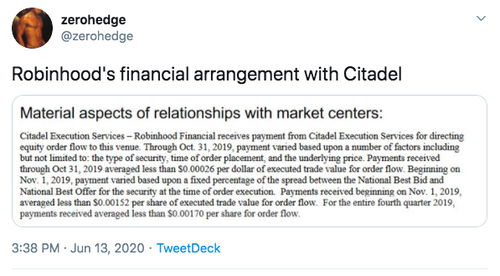 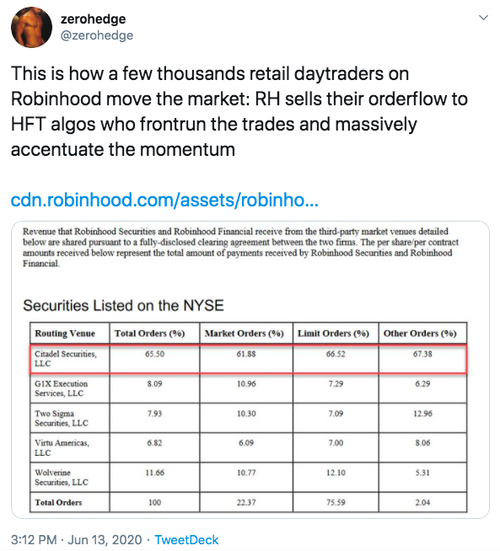 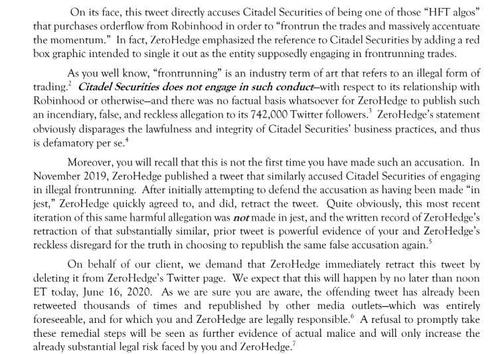 … until a few weeks later FINRA fined Citadel for… frontrunning of client orders!

And incidentally, regarding the statement by the firm’s chief legal officer, Dan Gallagher – who of course was formerly head of the SEC under Obama and then quickly took the revolving door to a better paying position – who said that “the settlement relates to historical practices that do not reflect Robinhood today”, here is who is the biggest buyer (frontrunner) of Robinhood orderflow today:

The Securities and Exchange Commission today charged Robinhood Financial LLC for repeated misstatements that failed to disclose the firm’s receipt of payments from trading firms for routing customer orders to them, and with failing to satisfy its duty to seek the best reasonably available terms to execute customer orders.  Robinhood agreed to pay $65 million to settle the charges.

According to the SEC’s order, between 2015 and late 2018, Robinhood made misleading statements and omissions in customer communications, including in FAQ pages on its website, about its largest revenue source when describing how it made money – namely, payments from trading firms in exchange for Robinhood sending its customer orders to those firms for execution, also known as “payment for order flow.”  As the SEC’s order finds, one of Robinhood’s selling points to customers was that trading was “commission free,” but due in large part to its unusually high payment for order flow rates, Robinhood customers’ orders were executed at prices that were inferior to other brokers’ prices.  Despite this, according to the SEC’s order, Robinhood falsely claimed in a website FAQ between October 2018 and June 2019 that its execution quality matched or beat that of its competitors.  The order finds that Robinhood provided inferior trade prices that in aggregate deprived customers of $34.1 million even after taking into account the savings from not paying a commission.  Robinhood made these false and misleading statements during the time in which it was growing rapidly.

“Today’s action sends a clear message that the Commission will not allow brokers to ignore their obligations to customers.”

“There are many new companies seeking to harness the power of technology to provide alternative ways for people to invest their money,” added Erin E. Schneider, Director of the SEC’s San Francisco Regional Office.  “But innovation does not negate responsibility under the federal securities laws.”

Without admitting or denying the SEC’s findings, Robinhood agreed to a cease-and-desist order prohibiting it from violating the antifraud provisions of the Securities Act of 1933 and the recordkeeping provisions of the Securities Exchange Act of 1934, censuring it, and requiring it to pay a $65 million civil penalty.  Robinhood also agreed to retain an independent consultant to review its policies and procedures relating to customer communications, payment for order flow, and best execution of customer orders, and to ensure that Robinhood is effectively following those policies and procedures.

The Injection Fraud – It’s Not a Vaccine

Biden Is Off To A Bad Start Under Progressive Pressure