About one-year into the virus pandemic, the return to normalcy for the restaurant industry is unlikely. More than 100,000 restaurants have already failed, revenues remain collapsed, and millions of workers are laid off. There was a glimmer of hope on Friday when some 75% of all US job gains in February were waiters and bartenders; besides that, COVID-19 has cleared the way for restaurant automation.

Automated kiosks, robotic bartenders, flippy the hamburger robot, automated pizza kitchens, and the list go on and on how restaurant operators who survived lockdowns are finding digital solutions for ordering, food preparations, delivery, and even serving.

While health experts are suggesting people stay at least 6 feet from others, one restaurant in Portland, Oregon, has found an innovative way to serve food without face-to-face interactions with patrons.

At Bistro Royale in Beaverton, the restaurant uses autonomous robots to minimize customer interaction between staff and customers while serving food. 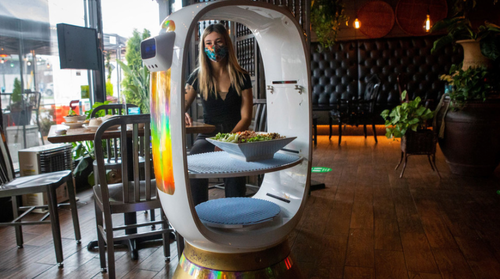 “I love to actually play with all these new technologies,” said Myint. “So, when we were looking for a solution, in terms of providing a safer dining experience, my tendency is actually to lean towards technology and see what’s available out there.”

Myint and his wife, Poe, opened Bistro Royale during the pandemic last year. The couple owns another restaurant and divided staff between both to minimize layoffs during lockdowns.

“It was challenging, no doubt about it, but at the same time, it was also exciting in a way,” he said of opening a restaurant during a pandemic. “We love problem-solving, and it gives you a sort of motivation or push to try harder.”

Myint said: “We have to keep evolving and changing and coming up with new things to sort of forge ahead of everybody.”

That’s when he decided to employ three robots (Milo, Navi, and the Beast). The serving robots use mapping software to navigate between customers and obstacles in the restaurant.

Myint clarifies that he does not believe robots can — or should — fully replace human servers.

“In the robotic industry, there’s a lot of worry about robots taking jobs away,” he explained. “They’re like a cellphone, right? You have your cellphone as a tool. So, we’re using them as a tool to sort of amplify what they do best.”

The robots are “celebrities,” he said. “We have families just come here for Milo. I guess he’s getting more popular than the restaurant.”

Robotic servers, Kiosks and apps, and all other sorts of automation introduced to restaurants to maintain social distancing are job killers. While last month’s surge in restaurant jobs was inevitable, don’t get too excited that a “V-shape” recovery in bartenders and servers will be seen anytime soon – due to the deep scarring caused by the pandemic.

The ushering in of automation and artificial intelligence into the industry will eventually result in entire restaurants controlled without humans – that could happen as early as the end part of this decade.

What does this all mean? Well, technological unemployment will continue to rise for years to come.

(POLL) Biden’s job rating improves to 44%; highest in a year