Russian Jets Pound Anti-Assad Militant Base In Syria, Killing Up To 200

Militants created a camouflaged base northeast of Syria’s Palmyra, where groups were formed for terrorist attacks and explosive devices were made. Russian Aerospace Forces planes have hit these targets, Rear Adm. Alexander Karpov, deputy head of the Russian Center for Reconciliation of Warring Parties in Syria, said on Monday.

“As a result… two shelters, up to 200 militants, 24 pickup trucks with heavy machine guns, as well as about 500 kilograms of ammunition and components for making improvised explosive devices were destroyed,” Karpov said. 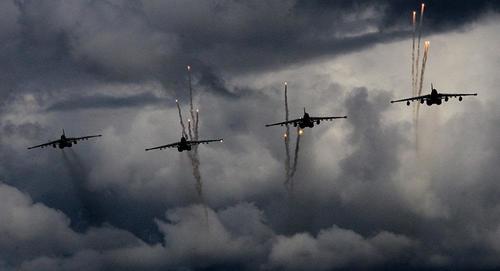 During a press briefing, he noted that Russian forces received information that “militants set up a camouflaged base northeast of Palmyra, where combat groups were formed to send and carry out terrorist attacks in various regions of the country, as well as the manufacture of improvised explosive devices was set up.”

Karpov added that after the location of these objects had been confirmed, air strikes had been inflicted on them by Russian Aerospace Forces.

According to him, “illegal armed groups have planned terrorist attacks and attacks on government agencies in large cities in order to destabilize the situation in the country ahead of the presidential election,” scheduled for 26 May.

Some 200 “terrorists” in Syria have been killed in airstrikes launched by the Russian military, according to the Interfax news agency on Monday.

The Russian Air Force reportedly struck a site located in northwestern Syria. It remains unclear which group the militants belonged to.

The terrorists are trained in the training camps of the militants, which are located “in the territories not controlled by the Syrian authorities, including in the At-Tanf zone, which is controlled by the US armed forces,” according to Monday’s Russian military statement.