San Francisco’s Poop-Patrol Boss Made $380K, Didn’t Do Crap, And Has Been Charged With Corruption

Authored by Adam Andrzejewski via RealClearPolicy (emphasis ours) 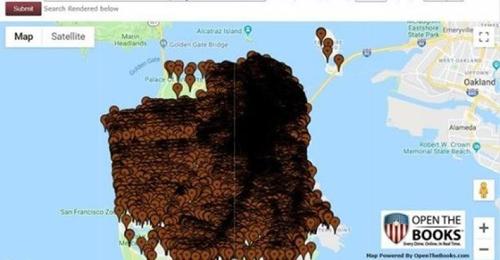 Certainly, the poop was deep in San Francisco, but then things really hit the fan.

And the FBI stepped in.

Mohammed Nuru, the public works director and self-titled @MrCleanSF, was in charge of keeping city streets clean and oversaw a $500 million budget. He was indicted by the Department of Justice (DOJ) in 2020.

Nuru was charged with one count of alleged public corruption and is innocent until proven guilty. “The complaint describes a web of corruption involving bribery, kickbacks, and side deals by one of San Francisco’s highest-ranking city employees,” said U.S. Attorney David L. Anderson. “The public is entitled to honest work from public officials, free from manipulation for the official’s own personal benefit and profit.”

Nuru was well paid in his futile attempt to keep San Francisco streets clean. His total taxpayer-funded cash compensation in 2019 was $380,120, and his base salary had jumped by $65,000 over eight years. Our auditors at OpenTheBooks.com compiled Nuru’s pay based on Freedom of Information Act requests filed with the City of San Francisco.

Currently, the federal investigation that snared Nuru has charged nine people with one already sentenced.

It seems the streets might not be the only thing dirty in the Bay Area.

The #WasteOfTheDay is presented by the forensic auditors at OpenTheBooks.com.

Are Americans Really Going To Spend $2 Trillion In “Excess Savings”

As Prices Explode, When Will The Clueless Fed Finally Turn Hawkish?