The oil market received a nice nudge higher from the all-important OPEC+ supply meeting this week. To that end, the group of oil exporters sent oil prices surging to new multi-month highs following their decision to roll forward the current oil supply cuts into April, including the 1mb/d unilateral cut that the Saudis put in place for February and March. The group did, however, make small exemptions again for both Russia and Kazakhstan, allowing for modest increases in production of +130kb/d and 20kb/d, respectively. This follows on the last supply decision that also witnessed exemptions for Russia and Kazakhstan, the two members that make up the plus in OPEC+. The reluctance of both countries to join in on the cuts begs the question of whether this expanded alliance is shrinking back to just the traditional OPEC member nations. Nonetheless, the small increases from the non-core OPEC countries were hardly noticed by the oil market and prices surged on Thursday, the day of the event. In fact, oil prices rallied despite a strong move higher in the US dollar and sharply weaker global equity markets, which made the oil move all the more impressive, to our minds.

As we noted last week, CTAs and momentum traders recently went “all-in” on oil futures from a directional point of view and commodity index products have also been witnessing a surge in interest this year. As such, the Saudis shrewdly recognized that in order to maintain the recent positive oil price momentum and speculative buying interest, they needed to “feed the bull”, as the old trading adage goes. So in a way, the decision was simply a way to hand-feed the oil-bulls a tighter supply narrative to chew on until the next OPEC meeting.

As regular readers know, we spend a great deal of time and effort analyzing speculative money flows into and out of oil futures markets as these flows can have a tremendous impact on prices, even much more than fundamentals in the short-term. As such, we regularly flag CTA-style fund positioning and flows as this group of traders has held a dominant role in the oil price formation in past years. This once dominant role has been waning though in more recent times which speaks to the power of ever-changing cycles in financial markets. This dynamic is quite clear from the sharp drop in assets under management (AUM) at publicly traded CTA funds or Managed Futures programs as they are also known. This reduction in capital is only half of the story though and as we noted last week, a new and perhaps more important trend has emerged to replace the dominant role that was most recently played by CTAs. To that end, we have been highlighting the surge in AUM at “long-only” commodity funds this year on a regular basis. In fact, these commodity fund flows have been significant again this week with close to +1B USD of inflows just in the last five days, taking the year-to-date figure above the 5B USD mark.

This surge in assets under management at “long-only” commodity funds coupled with the huge drop off in assets under management at CTA-style funds has resulted in a widening allocation of capital and a shift in trading behavior in the managed money category of traders as a result. In our view, and as the title implies, one needs to follow the speculative money flows to stay on top of current investor trends and right now the money is increasingly coming from macro-inspired inflation bets on commodities from an asset class perspective more so than any one specific commodity’s fundamentals, as we see it.

This has large implications going forward and one of the biggest differences between the two style of funds is that CTAs are “long/short” while the commodity index flows are “long-only”. So on the margin, we would expect to see a reduction in speculative “shorts” going forward and an increase in speculative “longs” holding all else equal. In addition to the directional positioning bias implications, flows along the forward curve are likely to change as CTA funds generally trade the nearby contract for liquidity purposes while “long-only” commodity funds tend to trade up to twelve months out in an effort to optimize roll-yield. As such, this new market cycle is likely to have a material impact for both oil futures prices and calendar spreads. 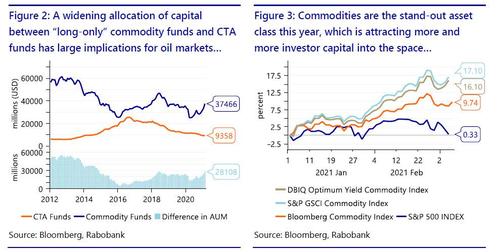 Looking forward, we continue to expect money flows into commodity funds to have a significant influence on oil prices this year and increasingly more so than CTA flows.

The sharp uptick in assets under management this year is notable, but total AUM at commodity funds is still just a fraction of what it was back in the early 2010s. Considering how much “new“ money is flushing through global financial markets, we see scope for this to change in a big way as asset allocators chase the strong year-to-date returns while also seeking out portfolio diversification benefits.