With stonks hitting an all time high earlier this week, we finally have a convergence between flows and stock movement, because according to BofA last week saw the largest equity inflows ever at a whopping $58.1bn, coupled with a “hearty” $13.1bn into bonds, $0.8bn out of gold, $10.6bn out of cash. 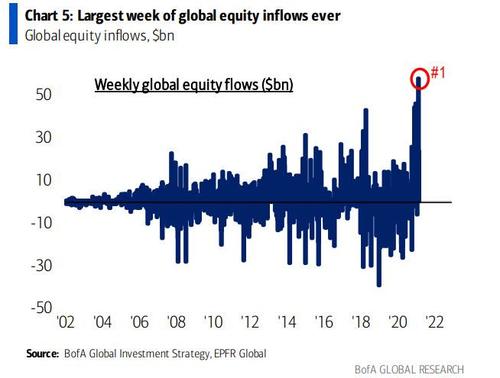 Broken down into sector components, tech inflows led the pack with a record $5.4bn… 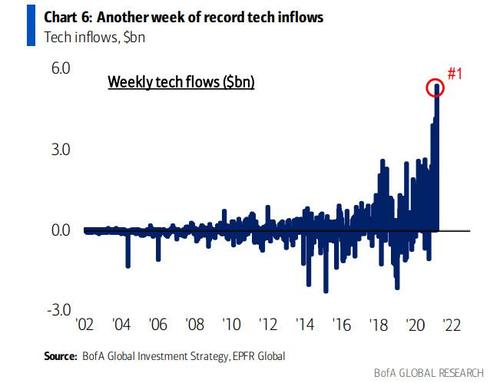 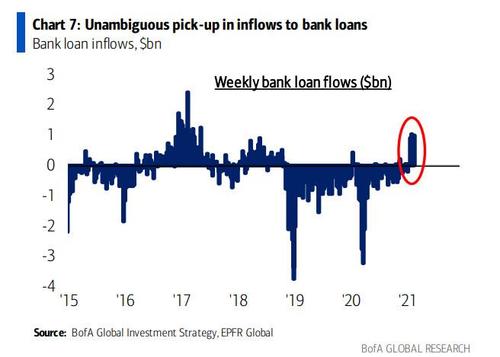 On the other end, last week saw the first outflow from gold in 2 months.

Even BofA’s notoriously contrarian Private Clients threw caution to the wind and flooded into stocks, while drawing down their cash at the fastest pace since September 2019. 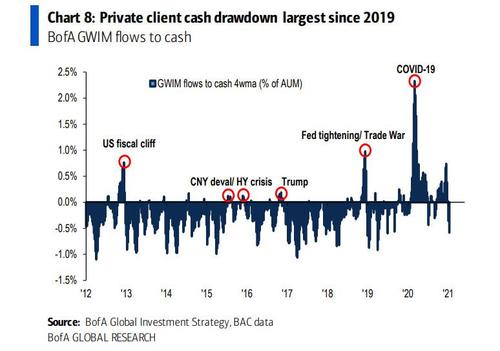 As a result the private client group’s allocation to stocks rose to $3.0tn, with stocks representing 63.1% of all private client assets – a new record high, with a record low 19.1% in bonds, and 11.7% in cash. 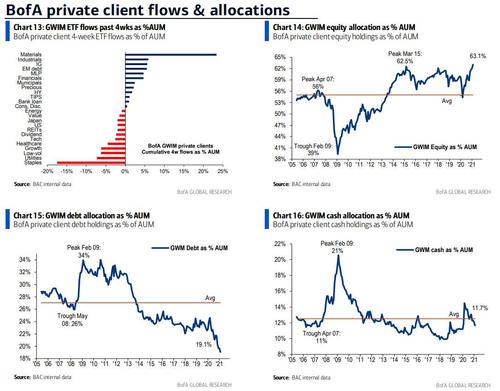 So amid this equity inflow euphoria surely volumes spiked? Well, no. In fact quite the opposite. As Morgan Stanley’s derivatives team notes, last week was the lowest week for cash volumes year-to-date, with SX5E trading just $14bn per day on average (vs. $16bn average this year). Likewise, SX5E futures traded just $31bn on average each day this week, compared to $41bn last week and half of the largest day this year ($60bn on 29th Jan). Volumes also at seasonal lows for index options, SX5E Calls trading just $18bn per day (-17% vs. seasonal avg.) and Puts trading $29bn (-22%).

That said, single name options volumes remain elevated – calls/puts each trading close to $3bn per day on average, +15% on seasonal norms, which is the residual effect of retail investors still trying to chase – and force – gamma squeezes.

One final place where there has been a surge in volumes, which however is tiny in the grand scheme of things, is pennystocks as redditors now try to corner stocks with the lowest float as they go down the list of worst quality assets and have finally ended up with the most worthless companies to pump and dump.

What all this means is that as a result of collapsing volumes – and liquidity – and ongoing regrossing by hedge funds who continue to reload their favorite positions even as they are slow to offset their net exposure by barely touching the recently covered shorts, stocks are being buoyed by a steady stream of buying but far less than normal which may explain the continued jitteryness of the market and the persistently high vix which, as Nomura noted yesterday, has been acting as if something is “broken.”

Futures Rise Ahead Of Blockbuster Payrolls As Commodities Soar