As more details from the now infamous debacle surrounding Tiger cub Archegos, whose massive derivative-based exposures spilled out into the open and transformed into the biggest and most painful rolling margin call to hit Wall Street since Lehman, we now know that at least six Prime Brokers scrambled to unwind the biggest hedge fund blowup since LTCM without hammering the overall market.

To “make a living in this business… be first, be smarter, or cheat…”

We previously noted that Morgan Stanley and Goldman Sachs were the “first” to break ranks and rejected the efforts of Credit Suisse’s emissaries who tried to create consensus to unwind the positions without sparking a panic.

As we now also know, Nomura and Credit Suisse which dithered and were unsure what to do, seeing their stock crushed and their counterparty risk hedge premia explode higher. 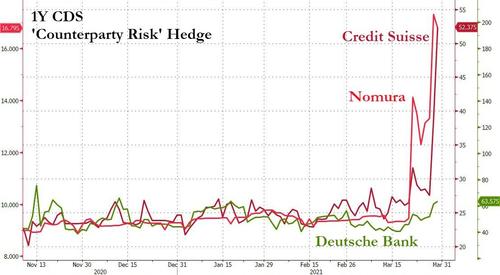 And today we get confirmation that Deutsche Bank was among the early game-theoretical defectors, as Bloomberg reports the big German bank sold about $4 billion of holdings seized in the implosion of Archegos Capital Management in one large private deal on Friday.

It’s unclear whether Deutsche Bank’s sale was to one firm or a consortium. If it was a single buyer, it would be the largest known transaction to emerge from the messy unwind of Hwang’s huge portfolio.

It also brings to almost $30 billion the known value of Archegos investments that have been liquidated so far.

Deutsche Bank joins Wells Fargo in the group of prime brokers that – reportedly emerge unscathed from this debacle. 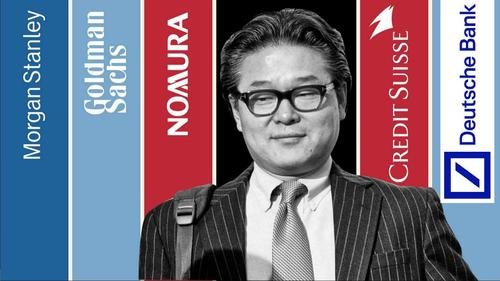 And now, as is usual after a a major market blowup, The Securities and Exchange Commission (SEC) has initiated a preliminary investigation into Bill Hwang over his leveraged trades that have roiled Wall Street.

Bloomberg reports that, according to a person familiar with the matter, who asked not to be named because the inquiry isn’t public, the examination is in its early stages and is being led by the asset-management group in the SEC’s enforcement division.

As a reminder, it’s not the first time that Hwang has been in the SEC’s crosshairs.

In 2012, his former hedge fund, Tiger Asia Management, pleaded guilty and paid more than $60 million in penalties after the SEC and U.S. prosecutors accused it of trading on illegal tips about Chinese banks. Hwang opened Archegos, a family office, following the sanctions, as the SEC kicked him out of the hedge fund industry by banning him from managing money on behalf of clients.

We look forward to seeing what they will do this time? And perhaps more notably, will this have a systemic impact on the entire Total Return Swap/Contracts-For-Difference market in US equities that flies under the regulatory radar (and as we have just witnessed in the case of Hwang, can lead to enormous unknown risks to the financial system).