Remember when Harry Markopolos warned  the SEC – repeatedly – that Bernie Madoff was running a giant ponzi scheme… and the SEC did absolutely nothing, eventually leading to the biggest fund fraud in modern history, with countless investors losing billions?

Well, after the recent reddit revolution sent a handful of highly shorted stocks soaring and blew up a couple of hedge funds while making other hedge funds much richer, the SEC has decided that this time it will be proactive in cracking down on fraud and according to Bloomberg SEC investigators are now “combing social media and message board posts for signs that fraud played a role in dizzying stock swings for GameStop Corp., AMC Entertainment Holdings Inc. and other companies.”

According to the report, the scrutiny – which comes following news that a non-recused Janet Yellen will head a task force of financial regulators addressing the recent surge in GameStop and other stocks, as well as silver, and which will inevitably also look at Citadel which paid Janet Yellen 810,000 in non-conflict of interest dollars for a handful of speeches last year – is being done in tandem with a review of trading data to assess whether such posts were part of a manipulative effort to drive up share prices.

The report notes that the SEC is “on the hunt for misinformation meant to improperly tilt the market” although how it can make that determination will be very interesting to watch: after all, the original Reddit post that laid out – in tremendous detail – just how the Gamestop squeeze would work, and which eventually sparked thousands of copycat articles and posts, was published back on September 8, titled “The REAL Greatest Short Burn of the Century” and is still available for anyone to read. There was absolutely nothing manipulative about it, and in fact it laid out the thesis very clearly – spark a huge short squeeze, something which countless funds, management teams and retail investors have tried to do in the past, and occasionally like in the case of Volkswagen, succeeded. 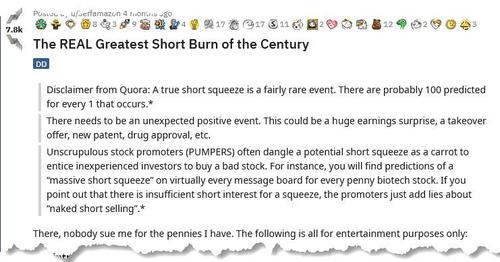 The thesis (of the post which explicitly was prefaced that it “is all for entertainment purposes only”) is simple:

Sup gamblers. Feel bad about missing the gain train on TSLA? Fear not – something much greater and stupider is here.

You know Citadel? The MM that took all our money today? Well now we finally won’t be at the mercy of the MMs. Instead, we’re going to temporarily join forces with the Galactic Empire and hijack the death star.

Our choice of weapon… $GME.

Huh?? Isn’t GME an absolute piece of trash stock? NO (will explain below), and even if it is, it’s not entirely relevant. The this turn around is going to make TSLA’s short burn look like warm afternoon tea.

Why? Well, most short squeezes are mostly math. This one is special because we have math AND great underlying news.

To be clear, this will happen whether or not we participate. I prefer us idiots to be a part of history. Here’s what’s up:

GME currently has between 85% – 99.8% short interest, depending on what site you use. For context, 20% is already considered high as the moon. TSLA and NFLX were around 30-40% at their peak. But GME’S ACTUAL SHORT INTEREST IS OVER 110%. In case you think I’ve gone nuts, look below:

The author, u/Jeffamazon, was of course correct – as January’s 1650% surge in GME demonstrated – and all he did was apply the same strategy that Porsche management did in late 2008 when it too sparked a historic squeeze in Volkswagen shares.

To the SEC, however, this is not sufficient, as the regulator is skeptical that mere retail investors could come up with something this sophisticated (even though this website has shown year after year since 2013 that going the most shorted stocks was and remains the best strategy for this broken market), and is instead looking into whether sophisticated investors (i.e., hedge funds) manipulated and herded the retail investing horde for their own ulterior benefit, a thesis that was promoted by noted short-seller Carson Block:

The prevailing narrative is that Wall Street short-sellers were caught flatfooted over the past two weeks as retail traders banded together via Reddit message boards and bought up stocks that hedge funds were betting against. But some market participants, including famed short-seller Carson Block, have started to speculate that the short squeezes that drove GameStop, AMC and other stocks to exorbitant heights might have also involved professional investors who either took advantage of the Reddit-fueled frenzy or helped hype it.

While the SEC hasn’t confirmed or denied that Block’s thesis is behind its probe, acting chair Allison Herren Lee said in a statement earlier this week that the agency was looking at “compliance with regulatory obligations, adequate and consistent risk disclosure, and determining if any fraudulent or manipulative behavior has occurred.”

There is also mounting concern about the possibility of bot activity in Reddit’s WallStreetBets chat after a spokesperson for the forum told CBS News that there was a “large amount” of it and that some posts were being blocked by an automated moderation system.

Of course, the real reason for the SEC to eager get involved is because the agency remains as clueless as always about how susceptible stocks are to violent short squeezes in a market that has never been more illiquid, and if nothing else, it wants to demonstrate that it is willing to learn, especially now that vocal and even more clueless politicians such as Elizabeth Warren are involved and the SEC will likely be called in to testify in Congress.

While shares of GameStop have sharply retreated this week, pressure is growing on the SEC to figure out what happened. Senator Elizabeth Warren, one of Wall Street’s leading critics in Washington, has demanded that the SEC investigate the “casino-like swings.” Both the House and Senate are planning to hold hearings on the market mania, which triggered big losses for some retail investors and prompted Robinhood Markets, whose app was used by many of the traders, to raise $3.4 billion to cover collateral demands.

The fingerpointing reached as high up as the Treasury, where the person whose actions were most directly responsible for today’s asset bubble and last week’s bizarro market activity – Janet Yellen, who before taking over the Treasury was in charge of the Fed for years – is now overseeing the regulatory oversight of what happened.

“Secretary Yellen believes the integrity of markets is important and has asked for a discussion of recent volatility in financial markets and whether recent activities are consistent with investor protection and fair and efficient markets,” the Treasury Department said in a late Tuesday statement.

It’s unclear what the SEC will do if and when it discovers some criminally collusive social media posts: while the SEC doesn’t regulate social media or message boards, Bloomberg notes that the agency has brought cases against people accused of making false claims about stocks online. In one case in 2000, the agency went after a 15-year-old for buying microcap stocks and then hyping the shares before quickly selling them for a profit. The teenager agreed to repay more than $270,000 in profit to resolve the allegations. In December, the SEC sued a day trader for planting false rumors about companies.

Yet what will make the SEC’s life very difficult is that nothing that has been said about GME on message boards is false: the company was indeed the most shorted small-cap company in the US (it’s SI as a % of float was 140% just a few weeks ago) as for the rest, well it’s just a snowball effect that emerged once the price started rising. Incidentally, the first sharp spike in GME stock took place two Fridays ago when Citron’s Andrew Left conceded that he would no longer discuss his GME short thesis. Sensing blood, that’s when the reddit traders started bidding up the name ever higher hoping that the Citron founder would be the first casualty.

And indeed he was, although there would be many others.

In any case, even if the SEC has a clear mandate to throw someone under the bus, it’s unlikely this will happen any time soon: SEC investigations often take months or even years to complete so it’s likely that the GameStop tumult will be long over by the time the probe wraps up.

Still, the agency’s findings could have implications for the broader retail market and lead to policy changes for short-selling, trade settlement, online apps and disclosure rules.

And while we certainly welcome the SEC’s effort to clamp down on social media manipulation, perhaps once it is done with Wallstreetbets, the SEC can look into the private website of www.valueinvestorsclub.com (VIC), created by hedge fund managers Joel Greenblatt and John Petry, where similar “pitching” of ideas happens all the time, only instead of millions of retail investors armed with $600 stimmy checks, the VIC audience is several dozen multi-billion dollar hedge funds.

Hey SEC, there is this thing called https://t.co/FS6kvfQlCB…

It would stand to reason that if what the redditors did was wrong, then the favorite online hangout of a select group of hedge funds should fall under the microscope too.