And to think that it started off so well.

Amid media reports of investor “optimism” on the back of more fiscal stimulus and covid vaccine rollouts (when in reality said media was merely goalseeking a narrative to the higher overnight futures), the Emini started off solidly in the green, and at one point were set to make a breakout attempt at the all time high of 3,859.75, getting to within 8 points…. when at exactly 1045am, a trapdoor opened below the market, and the Emini tumbled a whopping 60 points in under minutes… 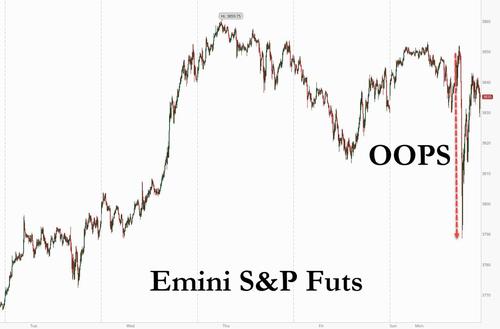 … a move catalyzed by a rollercoaster move in the most shorted names, the biggest of which – with 140% of its float shorted – was Gamespot, and which exploded as high as $159, a level it hit just minute before said trapdoor opened above, and sent the stock plunging. In fact, after more than doubling shortly after the open, GME at one point dropped as much as $100, turning red on the session before recovering losses… 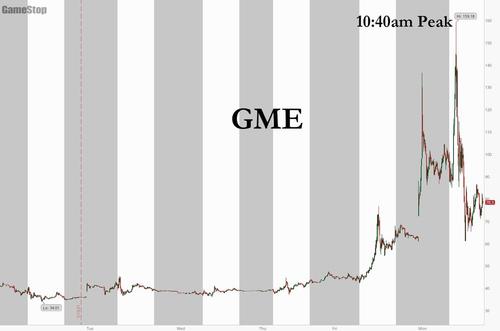 … when a news report indicated that despite the massive move higher, the Short Interest in GME had barely budged and was still at ~140% of float, where it had been two weeks earlier. 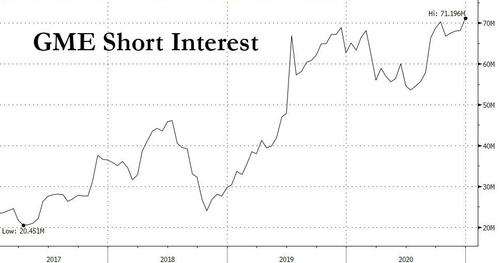 And while GME was the star attraction of the day as the insane short squeeze continued, virtually all most shorted stocks exploded higher, with a bsket of the 11 Russell 3000 companies whose Short Interest is 50%+ of the float (which we listed on Friday)… 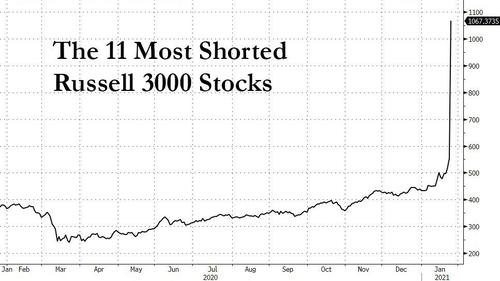 The tremors as Reddit/WSB/Robinhood took on the established hedge fund crowd led to the first official casualty, when we learned that Mevlin Capital’s Gabe Plotkin, who was heavily betting against some of the most popular short names, get a $2.75 bailout (margin call) from previous investors Citadel and Point72, who were forced to triple down or see their initial investment of $1 billion vaporize. 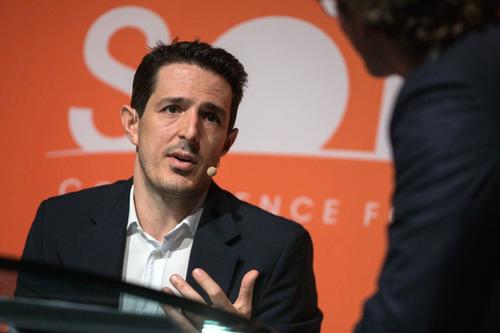 And while stocks did their thing, the real story of the day is that the Fed has broken the market so much, that a bunch of teenagers armed with “stimmy checks” can take on iconic hedge fund managers and steamroll them with impunity.

A less remarkable, if still notable observation, came from Bespoke, which note that today the market ended a streak of 51 trading days in which over 70% of S&P 500 stocks traded above their 50-DMAs – “the longest such streak since September 2009.” 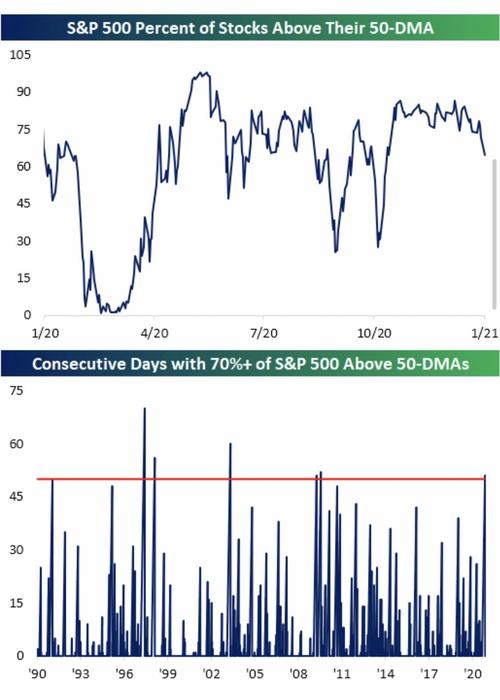 Elsewhere, the VIX soared as one would expect, surging as high as 26.63 to coincide with the market drop, before fading more than half of the move… 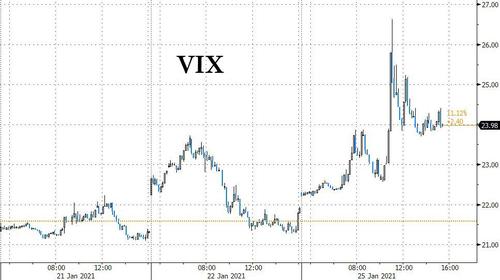 … while 10Y yields – and the curve in general – spooked by the sudden selloff in stocks, slumped in a flight to safety… 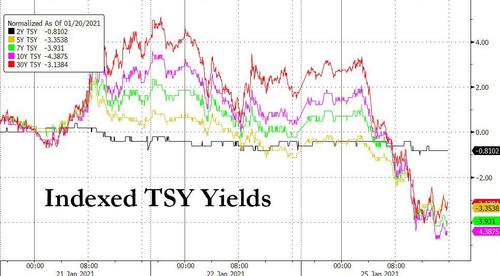 … which also pushed the dollar higher 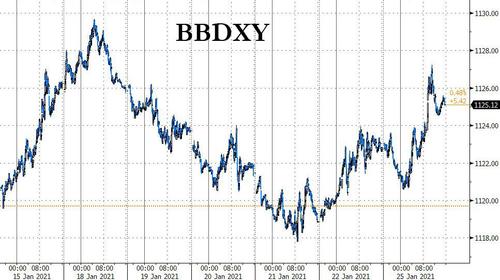 While commodities were relatively boring, there was a notable uptick in soybean futures, which rebounded modestly… 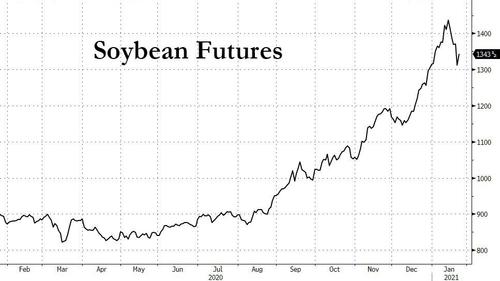 … after last week’s drop which saw a 31 cent plunge on Tuesday last week, the biggest one day drop for the contract. As The Bear Traps report notes, “rain in Brazil has been favorable and the country is on track for a record 4.89B crop. Normally, that would be bearish for U.S. soybeans prices, but supplies are so tight, prices has thus far remained in the uptrend, but are beginning to see signs of weakness.”

And yes, with prices rising across the commodity sector, inflation expectations continue to surge, prompting the question when – not if – the Fed will step in to contain this unprecedented liquidity tsunami.

And speaking of the Bear Traps report, earlier we noted that while it is easy to blame the market turmoil on the massive rolling short squeezes, Larry McDonald had a different take on what may prompt the game of musical chairs to stop abruptly.

Our 21 Lehman Systemic Indicators are screaming higher. The inmates are running the asylum and the probability of the Federal Reserve breaking out their creative “macro prudential” tool box is the highest in years. U.S. central bankers are no longer Trump constrained, the banking system is strong but the equity market has far more in common with Steve Wynn (Vegas) than Warren Buffett (Omaha).

We think the Fed sends a shot over the bow very soon. Our social justice, inequality embarrassed Fed is not happy. The will not taper but they can make serious threats to risk takers. We have an explosion of SPAC / IPO issuance, $850B of margin debt or 75% above 2015 levels, the most shorted equities up 75% vs. 16% for the S&P 500 since October (bulls running over bears), record high call vs. put volume with the little guy leading the charge SELL Mortimer Sell. The risk reward is atrocious from a long perspective in U.S. equities.

Impeachment Threat to Reflation: Moves to the Senate floor next week. Impact; 1 . Pushes out the Fiscal timeline.  2 . Similar to the GOP immediately trying to take down Obamacare, the signature achievement of the previous administration , on day one of the Trump administration. The move was Unwise and Not helpful to the fiscal policy path.

Remember, the tax cuts were sold to us as a certainty in Q1 2017, they didn’t arrive until late Q4 that year. In our view, this speaks to a potential rally in bonds / USD for the next few weeks.

Best case scenario, we have a $1.9T fiscal plan coming in late February early March with the current the bid / offer at $800B to $1.9T. However, any additional variant / mutations Covid risk increase will game the spread in the direction of the offer side if the  mpeachment doesn’t blow up the deal altogether.

Biden and the ‘Yellow Brick Road’