Congress has passed a stopgap government funding measure via voice vote, which will fund operations for another week as Congress works to reach spending and COVID-19 relief deals. The measure will head next to President Trump’s desk, which he will need to sign into law before Saturday to avoid a government shutdown. 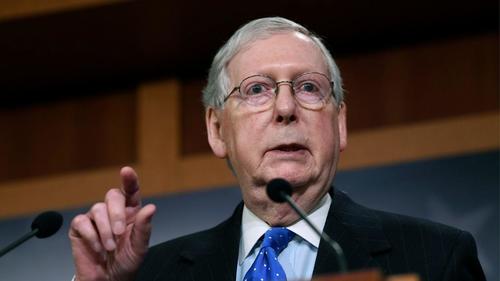 The bill will extend funding through Dec. 18 as lawmakers hash out what’s shaping up to be a $1.4 trillion package to keep the government running through the end of Sept. 2021 – though they’ve failed to agree exactly how the funds will be used, according to CNBC.

Despite the most frantic efforts in months to craft a coronavirus rescue package, Congress has several major disputes to resolve to reach a deal. Millions of Americans await help as an uncontrolled outbreak ravages communities across the country and leads to food insecurity unseen in years.

If lawmakers cannot pass relief legislation in the coming days, about 12 million people will lose unemployment benefits on the day after Christmas. An eviction moratorium and family leave provisions put in place earlier this year will also expire at the end of December. –CNBC

At present the largest stumbling blocks remain over Democratic demands regarding state and local municipalities receiving pandemic relief, vs. liability protections which would shield employers from COVID-19 related lawsuits.

Democrats, meanwhile, have criticized the White House’s most recent $916 billion aid offer endorsed by GOP leadership, which doesn’t include additional federal unemployment insurance funding, yet does include a $600 direct payment – half of what Democrats are seeking. Instead, the left has placed their support behind a $908 billion package crafted by a bipartisan group which would include a $300 weekly federal jobless benefit but not direct payments.

The big picture: Despite the momentum in stimulus talks, McConnell (R-Ky.) has refused to budge on his red line of including liability protections for businesses in the next relief bill. –Axios

According to House Speaker Nancy Pelosi, lawmakers “cannot go home” until a deal is reached – implying that Congress may remain in session until Dec. 26, when various emergency aid programs will otherwise expire.

D.C. Cop Speaks Out, Says Cops Were Among Rioters Storming Capitol, Flashed Badges to Get In