Senate To Kick Off Debate On $1.9 Trillion Stimulus As Soon As Wednesday

Te Senate may begin debate on President Biden’s $1.9 trillion COVID-19 relief package as soon as Wednesday, as Majority Leader Chuck Schumer predicted on Monday that the chamber has “some late nights” ahead this week, according to Politico. 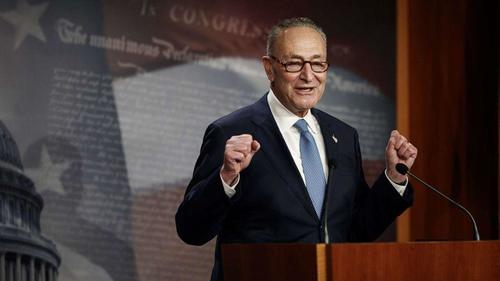 The goal is to pass the stimulus into law before March 14, when enhanced unemployment benefits are set to expire. In order to accomplish this, Senate Democrats will use ‘budget reconciliation’ – a tool used to pass bills by simple majority as opposed to requiring at least 60 votes to proceed. If all Democrats sign on to the bill – which is all the more likely after a $15 an hour minimum wage provision was dropped by the Senate parliamentarian, there will be enough votes to send it to Biden’s desk.

In addition to extending benefits, the bill will include $1,400 stimulus payments – though just 9% of the $1.9 trillion it is slated for direct COVID-19 intervention such as vaccines and testing. Then there’s the pork… $100 million for an underground rail project in Silicon Valley, $480 million towards the preservation of Native American languages, $50 million for ‘environmental justice’ grants, and a $1.5 million bridge connecting New York and Canada. According to the Committee for a Responsible Federal Budget, around 15% of the package goes to “long-standing policy priorities that are not directly related to the current crisis.”

According to Schumer, Senators are in for “a hardy debate and some late nights,” adding “But the American people sent us here with a job to do, to help the country through this moment of extraordinary challenge.”

The House passed Biden’s pandemic relief plan in the early hours of Saturday morning. While that House-approved legislation would increase the minimum wage to $15 an hour, the provision is effectively dead during the Senate debate after its parliamentarian determined Thursday evening that including a hike in the Senate bill would violate the chamber’s rules.

The Senate could begin consideration of the package as early as Wednesday. However, its parliamentarian still needs to rule on a handful of outstanding issues that the massive legislation addresses, including health subsidies aimed at keeping laid off workers on their insurance and pensions. -Politico

According to Senate Majority Whip Dick Durbin (D-IL), passing the COVID-19 relief bill will be “less complicated” without the minimum wage component.

Reconciliation notably allows any Senator to offer an amendment to the COVID-19 relief package. According to the report, Senate Republicans plan to offer several such amendments in an attempt to put Democrats on the spot regarding key issues. That said, Durbin says he’ll whip against “any amendments that we think will be destructive of the reconciliation process.”

One issue pressed by Republicans is a budget amendment which would prohibit illegal immigrants from receiving stimulus checks – a measure which attracted the cross-party votes of eight Senate Democrats. That said, Senate Republicans say Democrats aren’t negotiating with them – and say that the legislation is not sufficiently targeted.

“This is where we are: a bad process, a bad bill and a missed opportunity to do right by working families.”