Senior MP: British Public Will “Rise Up And Bring Down” Lockdown If Exit Plan Isn’t Outlined

British MPs within his own party are demanding that Prime Minister Boris Johnson outline some sort of exit strategy for the nationwide lockdown in the country, with one senior minister warning that if he doesn’t people will begin to “rise up and bring it down”. 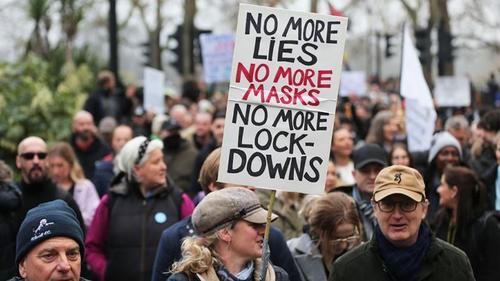 Speaking to Talk Radio, Sir Desmond Swayne, the MP for New Forest West, warned that the “goalposts keep moving” on the lockdown timeframe, and “We have to focus on hospital admissions and keep that focus rigorous…[or] at some stage people have got to rise up and bring it down.”

“People have to got to rise up and bring it down!”

Swayne’s comments echo those of West Midlands Police commissioner David Jamieson, who warned back in October at the start of the second lockdown that “We’re sitting on a time bomb here.”

“We’re getting very near the stage where you could see a considerable explosion of frustration and energy,” Jamieson noted, adding “Things are very on the edge in a lot of communities and it wouldn’t take very much to spark off unrest, riots, damage.”

Boris Johnson has repeatedly said that it is ‘too early’ to say when restrictions will be lifted, while suggestions for easing the lockdown by other government figures keep moving to later and later in the year, with the Summer or beyond now being touted as a possible timeframe.

Seventy Conservative MPs have formed a coalition urging the government to start lifting the lockdown no later than early March .

MP Mark Harper, who is leading the coalition dubbed the ‘Covid Recovery Group’ said “People must see light at the end of the tunnel and feel hope for the future and businesses need to be able to plan our recovery.”

Meanwhile, Environment Secretary George Eustice has warned that even more ‘draconian’ restrictions may be introduced if people don’t obey the current ‘rules’.

“Generally, with this whole pandemic, we’ve had to take some quite extraordinary steps, very draconian steps, that are a big infringement on people’s liberty,” Eustice said.

“And yes, that does mean that we have to intervene in quite a draconian way and issue penalties, and we make no apology for doing that,” he continued, adding the further measures are “under review.”

As we have highlighted, at the behest of the government, police are using increasingly hardline measures to enforce the lockdown, including demanding powers to break into people’s homes, and issue ever increasing fines to anyone found flouting restrictions.

While all of this is going on, medical experts, scientists and researchers all over the globe are urging that lockdowns do not work in halting the spread of the virus, and will have long lasting consequences that far outstrip the damage being done by the disease itself.

What’s Yours Is Now Mine: America’s Era Of Accelerating Expropriation