“Maybe this time is different. Those words, supposedly the most dangerous to utter in the investing realm, came to mind amid the frenzied pops in the highly anticipated initial public offerings recently.” That quote was from Randall Forsyth discussing why the current market mania reminds him of the “Shades of 1999.”

There are certainly many similarities between today and 1999. From exceedingly high valuations to a rush by private equity investors to IPO overly priced companies as quickly as possible, prices are high. Of course, such is not possible without an underlying “Fear Of Missing Out, or F.O.M.O.” by retail investors.

As discussed previously, “valuations” are a representation of market excesses. In other words, psychology is key to the formation, and inflation, of a financial bubble. However, it requires a supportive underlying narrative, a “siren’s song” to lure “sailors onto the rocks.”

Price measures the current “psychology” of the “herd” and is the clearest representation of the behavioral dynamics of the living organism we call “the market.”

My colleague, and always a good read, Greg Feirman at Top Gun Financial Planning, recently had a great post.

“I discovered what I believe to be the strongest bull case yesterday in an article by Rothko Research on Seeking Alpha. I can do no better than to quote from  “Letter To Equity Bears: Do Not Underestimate The Force Of Liquidity”

One crucial thing that we have learned over the past 12 years is that the Fed has become very sensitive to a sudden tightening in financial conditions, especially when equities start to fall aggressively.”

The chart below certainly makes his point. 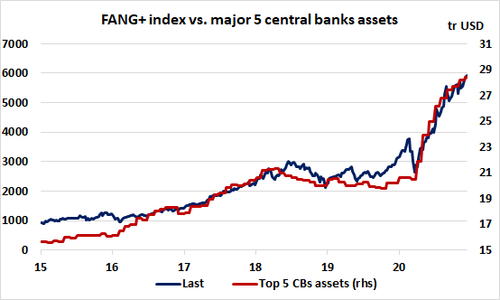 Variant Perception also chimed in with “It’s The Most Wonder-Bull Time Of The Year.”

“Reflation narratives are becoming consensus, but there is little reason to be contrarian for contrarian’s sake.”

Of course, this certainly brings us to Bob Farrell’s Rule #9:

“When all the experts and forecasts agree – something else is going to happen.”

The Beatings Will Continue

As noted, the “psychology” of a “mania” requires a narrative. In this case, it is the “Fed Put.” As Greg noted:

“Why did investors underestimate the force of monetary liquidity after 10 years of sample data? We mentioned previously that stocks could diverge quite significantly from fundamentals amid the massive Fed intervention and the strength of the FANG stocks in the COVID-19 environment. We can notice the titanic rise in central bank assets has ‘perfectly’ matched the strong rebound in the mega-cap growth stocks in the past 8 months.”

In other words, the Fed’s primary goal has been to allow the “beatings to continue until morale improves.”

The repeated rounds of liquidity, interventions, and accommodative policies have trained investors to take on more “risk.” Such was the point we recently discussed in “Moral Hazard.”

“What exactly is the definition of ‘moral hazard.’ It is the lack of incentive to guard against risk where one is protected from its consequences, e.g., by insurance.”

Where do we see evidence of “moral hazard” currently?

You don’t have to look too hard to find it. 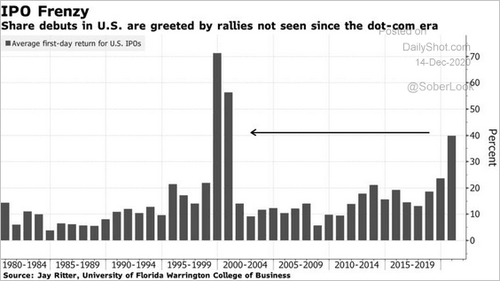 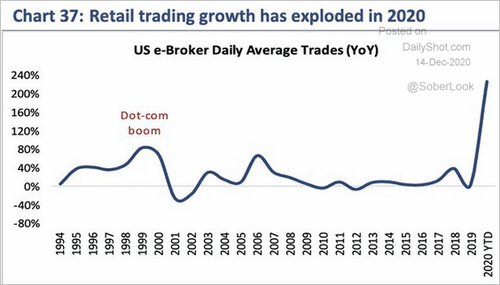 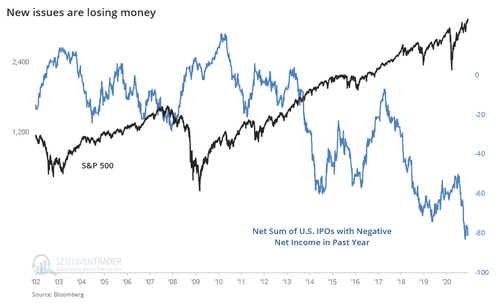 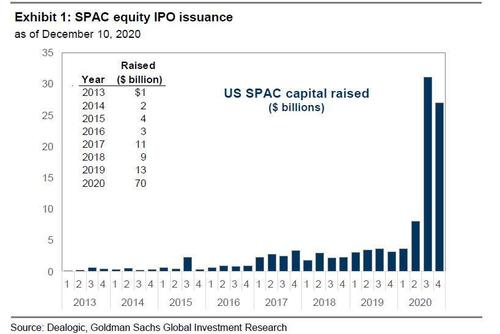 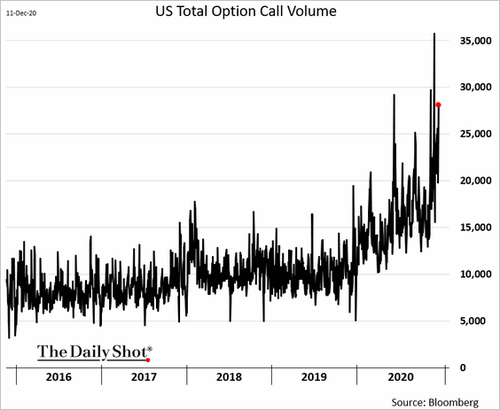 You get the idea.

Speaking of “SPAC exuberance,” Bespoke Investment Group recently published one statistic showing the market’s feeding frenzy. Of the 287 SPACs that have come to market over the last two years, just six are down 10% or more from their IPO price. In contrast, 15 SPACs have more than doubled from their IPO price.

Such activities will not end well. However, the “psychology” is that since the Federal Reserve will not let the markets fall in price, there is “no risk.”

Seen This Picture Before

We have written extensively about the extreme extension we see in the markets. Such is due to the Fed’s ongoing “repo” operations in 2019, and current QE directly fueling a sharp rise in asset prices. The problem is prices are surging at a time when both corporate profits and earnings growth remain weak.

Notably, the ongoing Fed policies have lured investors into an extreme sense of complacency, as witnessed by the sharp drop in “short-interest” in the S&P 500. This belief the markets can no longer have a correction is fueling an equity chase in companies with the most inferior underlying fundamentals.

The last time we saw asset prices surge by 20%, or more, in a month, particularly in companies with no revenue, unfavorable valuations, and poor business models, was in 1999. The chart of Qualcomm (QCOM) in late 1999 is a good example.

Unfortunately, for investors in QCOM, by the end of 2000, that 95% gain turned into a 10% loss. But QCOM was not alone. The only difference is that the vast majority of the other companies like Global Crossing, Enron, Worldcom, Lucent Technologies, Sun Micro, and many others no longer exist in the original forms today, if at all.

Here is another excellent example, if you had bought CSCO at the turn of the century, you would still be down by 10% on your position 20-years later.

Over the last 5-years, AAPL has barely grown revenue, yet its stock price has gone parabolic. I love the company, but they will never grow revenue to justify the current price.

The same for DIS.

Many suggest stocks are rising in anticipation of growth; such was also the “rationalization” for the last 5-years.

In other words, there is an essential difference between “hoping for growth” and getting it.

Today, we see the same chase in companies that exhibit similar characteristics to what we saw in 1999:

Sure, companies from Tesla (TSLA) to Zoom Video (ZM) might be the next Amazon (AMZN) of the “dot.com” mania to survive and prosper. However, the odds are highly stacked against that being the case.

Here are a few examples of why it looks like investors are once again “Partying Like It’s 1999.”

These are but just a few examples. The market is replete with many companies whose price far exceeds any rational grasp of the underlying fundamentals.

But such is always the case when individuals throw out “fundamentals” to chase “price.”

In today’s market, the majority of investors are simply chasing performance.

But, this isn’t “investing,” it’s “speculation.”

Think about it this way.

If you were playing a hand of poker and dealt a “pair of deuces,” would you go “all-in.”

The reason is you intuitively understand the other factors “at play.” Even a cursory understanding of the game of poker suggests other players at the table are probably holding better hands, which will lead to a rapid reduction of your wealth.

Ultimately, investing is about managing the risks that will substantially reduce your ability to “stay in the game long enough” to “win.”

Robert Hagstrom, CFA penned a piece discussing the differences between investing and speculation:

“Philip Carret, who wrote The Art of Speculation (1930), believed “motive” was the test for determining the difference between investment and speculation. Carret connected the investor to the economics of the business and the speculator to price. ‘Speculation,’ wrote Carret, ‘may be defined as the purchase or sale of securities or commodities in expectation of profiting by fluctuations in their prices.’”

Chasing markets is the purest form of speculation. It is just a bet on prices going higher than determining if the price paid for those assets is a discount to fair value.

Along with David Dodd, Benjamin Graham attempted a precise definition of investing and speculation in their seminal work Security Analysis (1934).

“An investment operation is one which, upon thorough analysis, promises safety of principal and a satisfactory return. Operations not meeting these requirements are speculative.”

There is also an essential passage in Graham’s The Intelligent Investor:

“The distinction between investment and speculation in common stocks has always been a useful one and its disappearance is a cause for concern. We have often said that Wall Street as an institution would be well advised to reinstate this distinction and to emphasize it in all its dealings with the public. Otherwise the stock exchanges may some day be blamed for heavy speculative losses, which those who suffered them had not been properly warned against.”

Regardless of whether you believe fundamentals will ever matter again is irrelevant. What is essential is that periods of excess speculation always end the same way.

For now, Dave Portnoy has garnered a legion of followers. However, Dave’s financial future is entirely secure after selling his company to Penn National for $450 million. So, when things go wrong in the market, he will be just fine financially. However, for the host of inexperienced, over-confident millennials who follow him, many have the financial livelihoods on the line.

If you are one of our younger readers, who have never been through an actual “bear market,” I wouldn’t believe what I am telling you either.

A real bear market will happen. When? I don’t have a clue.

But it will be an unexpected, exogenous event that triggers the selling.

It always appears easiest at the top, and at the bottom retail investors will not want to buy.

Historically, the environment we are living in currently has not worked out well for investors. However, in the short-term, the “irrationality” will last long enough to convince you “this time is different.”

Russia Blames Ukraine For “Act Of Terrorism” After Consulate Attack