Chicago Mayor Lori Lightfoot has ordered teachers to return to classrooms for in-person instruction starting Monday, while the Chicago Teachers’ Union (CTU) is set to call a strike after weekend negotiations to secure a deal failed over the weekend. 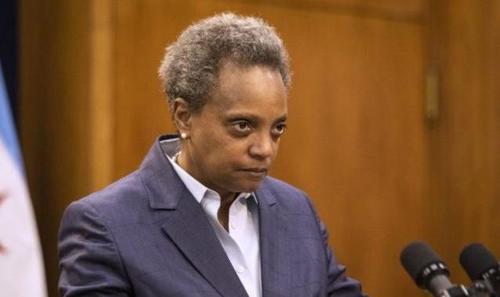 On Sunday, Lightfoot announced that teeachers who don’t have an “approved accommodation” will be expected back in class, and those who don’t will be locked out of their district accounts on Monday at end of business. If there are “mass lockouts,” the CTU said in a Sunday bulletin that they will call a meeting of its House of Delegates in order to “set a date for a strike to begin,” according to the Chicago Tribune.

“Remote learning is failing too many of our kids,” Chicago Mayor Lori Lightfoot says, urging the city’s teachers to return to in-person learning. “We have to think about their present but also their future” https://t.co/haB4cyWrqx pic.twitter.com/eHufcnSxg0

Schools had been slated to reopen for more than 60,000 kindergarten through eighth grade students Monday, joining about 6,500 preschool and special education students who started attending in-person on Jan. 11.

But Chicago Public Schools pulled the plug late Sunday when it became increasingly clear teachers would continue to refuse to return en masse, despite the hard line Lightfoot and district CEO Janice Jackson have been toeing for weeks, threatening to lock educators out of their remote teaching platforms if they won’t show up in person. –Chicago Tribune

“Let me be very clear: Our schools are safe. We’ve invested over $100 million dollars in ventilation, other safety protocols, making sure that we have masks, safety health screening, temperature checks — all the things that you would expect that the CDC guidance has told us that we know makes sense to mitigate any issues in schools. We’ve looked at and followed every study across the globe, including here in Chicago, by our local experts,” Lightfoot told MSNBC‘s “Morning Joe.”

“We’ve had three weeks of safely implementing our plan until the teachers union blew it up,” Lightfoot added.

To be clear, this wasn’t the promise made to just me. CPS CEO said any educator (without an accommodation) who refuses to go into the building tomorrow will be locked out.

Apparently there are consequences to spooking constitutents with ongoing lockdowns for the super deadly virus during the Trump administration, only to suddenly push for reopening under Biden.

Meanwhile, the teachers (some of whom are presumably teach science) aren’t ‘following the science,’ after former CDC director Robert Redfield, said in November that “All schools should remain open,” saying in a statement: “[T]here is extensive data that we have gathered over the last two to three months to confirm that k-12 schools can operate with face-to-face learning and they can do it safely and they can do it responsibly,” adding “The infections we have identified in the schools, when they have been evaluating, were not acquired in schools. They were acquired in the community and the household.”

More recently, a study published last week in the Morbidity and Mortality Weekly Report found that just 3.7% of COVID-19 cases at 17 Wisconsin schools were tied to in-school transmission.

Only 7 of the 191 cases (3.7%), all of them in students, were linked to in-school transmission. Five of the cases occurred at elementary schools (3 in a single class), and 2 were associated with secondary schools. No staff member infections were tied to in-school spread. –CIDRAP

Officials have pushed back the resumption of Pre-K through eighth grade classes one day to Tuesday, however the Tribune isn’t alone in doubting whether that will happen.

The Union, meanwhile, accused the Mayor and Jackson of having “trouble telling the truth publicly,” and urged teachers not to believe anything that doesn’t come from the union, according to the report.

“CPS never showed up at bargaining Sunday,” the union said in a bulletin. “After hours of waiting, CTU leadership was told the CPS team would not come to bargaining unless we made massive concessions: on CDC health metrics; on vaccinations; on giving time for vaccination before reopening; and accommodations for over 2,000 members who have medically vulnerable people in their households.”

“That is not only unacceptable, that is outrageous. We don’t want a strike.”