There is a reason why we highlighted the earlier report from Politico that FDIC Chair Jelena McWilliams said it doesn’t seem as though banking agencies need to extend the SLR extension.

This matters because as we first explained two days ago in “The SLR Is All That Matters For Markets Right Now“, and as Bloomberg’s Edward Bolingbroke writes this afternoon, the market is unhappy with the potential risk that bank balance sheets will become significantly more constrained after April 1 (when the SLR ratio will return all else equal and holding excess TSYs will be punished by regulators) and as a result long-end dollar swap spreads have collapsed “as talk heats up on whether the Federal Reserve will extend exemptions from a key regulatory rule, which expires at the end of this month. Bulk of tightening was seen after”, Bollingbroke writes.

As shown below, spreads in 10-tenors were sharply tighter by 1.5bps on the day with most of the narrowing move occurring after 10:30am ET, when the Politico report received a broader distribution (it first hit overnight but few noticed it). Following the move, the 10-year spreads dropped to the tightest since Feb. 26. The move in the long-end swap spread followed a similar dive on Wednesday after Senator Elizabeth Warren said U.S. regulators should reject banks’ appeals to extend an easing of capital requirements. 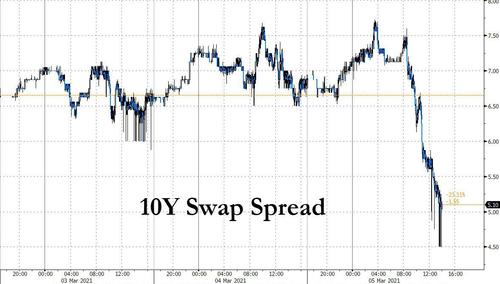 As discussed here extensively, on Thursday Fed Chair Powell failed to address the topic in his interview with Wall Street Journal leading to great uncertainty about the future of what could amount to tens of billions of TSY securities on bank books which would have to be liquidated at the worst possible time: just as yields are spiking. As a result, swap spreads are starting to price in the potential funding squeeze, and absent a prompt resolution, it is very likely that swap spreads can turn negative in the coming days as markets frontrun the Treasury market mess that could emerge as soon as April 1.

One final point: on Friday, Bank of America rates strategists Ralph Axel and Mark Cabana repeated what we said earlier this week saying that there is an increasing chance of an extension to the exemptions for another year “in some modified form.” So far, however, there is nothing but silence from the Fed…

(READ) New study: 3-feet social distance at school is as good as 6 feet

Time for a Divorce

“I’m A Street Fighter”: Pelosi Says Capitol Insurrectionists Would Have “Had A Battle On Their Hands” If They Found Her