Small-Cap Investors Have A Choice To Make

Another round of stimulus checks are right around the corner, which could play well for the Russell 2000, but also sink it. It comes down to the retail investor versus the market pricing in future aid packages.

The upcoming round of fiscal stimulus is likely already baked into the market as shown by the small-cap rally since Biden’s election. But after the current bill is signed by the president, it invites a simple question: what’s next?

On the campaign trail and during the lame duck session, President Biden emphasized the need for several rounds of stimulus despite some critique that flooding the economy with money would create inflationary pressures and require a vigilant government eye to monitor the impact and adjust accordingly. Though with a Democratic majority in Congress, it seems further aid or an infrastructure bill isn’t much of a stretch. Any comments along those lines could give the small-cap index yet another boost. (Watch for this in his primetime address tonight.)

On the flip side though, it’s also subject to volatility from the ongoing retail bid. As the likes of GameStop or AMC Entertainment among others become not only the largest members of the index (and therefore move the benchmark as a whole), but also the most volatile, it could discourage institutional fund flows from exposure as it did in late January. That risk event ended up reversing momentum bids in the Nasdaq 100 and the Russell 2000, two indexes that used to trade at each other’s expense, but then saw a positive correlation build up. Tech caught the brunt of the hit, but small-cap gains have also plateaued for the last four weeks. And now, another round of $1,400 checks are coming with the expectation that some of it will end up in the stock market. 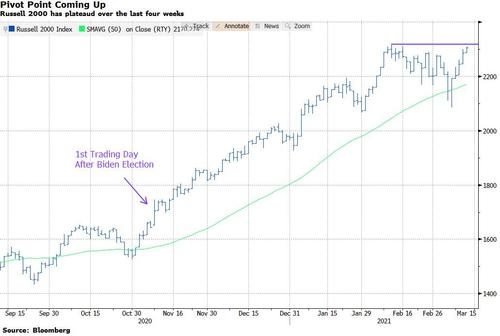 Add on recovering economic data and perhaps the case for further stimulus is weakened along with one of the biggest bullish catalysts for small-caps.

Chaos Rules in D.C.: Lyn Alden on the Fourth Turning and Her Latest Trades