People have been making 3D-printed guns at home for nearly a decade, but in the last few years, 3D printed technology, blueprints of weapons, and materials have rapidly evolved that allows anyone to print AR-15s, AKMs, semi-automatic pistols, and others with no serial number, no registration, no background check.

These weapons are also known as “ghost weapons” due to their untraceable nature. Criminals are embracing ghost guns and even creating manufacturing facilities.

Spain’s National Police said police found 3D-printing equipment that could print lowers for weapons. They also found machinery that could manufacture gun barrels in under two minutes, leading authorities to believe the rate of weapons produced at this factory could be staggering. 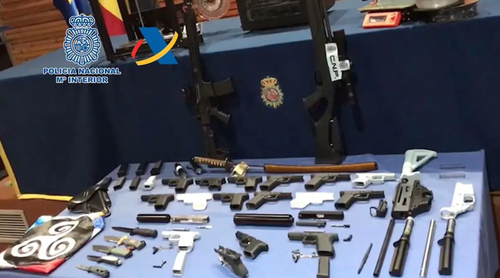 Police confiscated the components for 19 3D-printed weapons and chemicals that could be used for manufacturing explosives.

Governments around the world are scrambling to clamp down on 3D-printed weapons.

The Biden administration recently declared war on ghost guns. Anyone can purchase a 3D printer and download weapon CAD files online, such as ones from the 3D-printed website CTRL-Pew, and build a 100% homemade semi-automatic rifle that shoots 9 mm ammo and can survive thousands of rounds.

Since ghost guns have been so disruptive in the Western world, governments are expected to take action against them. The question is, how? What are they going to do, ban printers?