Despite ongoing weakness in ‘hard’ data, preliminary US ‘soft’ survey data from Markit showed that both the Manufacturing and Services side of the economy improved (albeit marginally) in March. 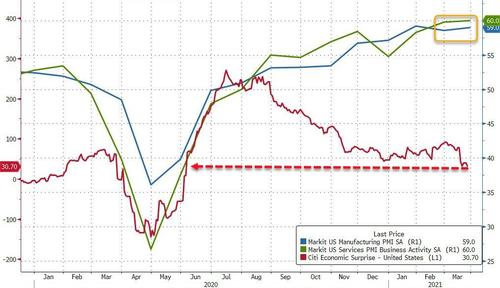 On the manufacturing side, new orders rise to 60.8 vs 57.4 in Feb. (the highest reading since June 2014) and the ninth consecutive month of expansion.

But the big headlines were all about inflation… and its catastrophic:

Reports of ongoing supply chain issues led to marked hikes in input costs across the service sector during March.

The rate of input price inflation was the sharpest since data collection began in late-2009. Firms were able to partially pass higher costs through to clients, however, as selling prices rose at the fastest pace on record.

Amid substantial supplier shortages and input delays, manufacturing firms registered the fastest rise in input costs for a decade in March.

At the same time, firms sought to partially pass greater input prices through to clients, with the rate of charge inflation the sharpest on record.

“Another impressive expansion of business activity in March ended the economy’s strongest quarter since 2014. The vaccine roll-out, the reopening of the economy and an additional $1.9 trillion of stimulus all helped lift demand to an extent not seen for over six years, buoying growth of orders for both goods and services to multi-year highs.

“Producers were increasingly unable to keep pace with demand, however, due mainly to supply chain disruptions and delays. Higher prices have ensued, with rates of both input cost and selling price inflation running far above anything previously seen in the survey’s history.” 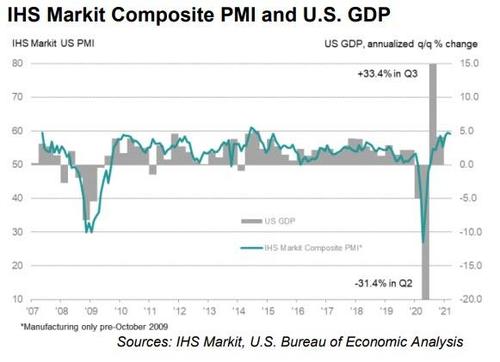 Finally, it is increasingly clear that stagflation is here:

“firms sought to partially pass greater input prices through to clients, with the rate of charge inflation the sharpest on record.“

“firms commonly reported slower output growth due to a lack of raw materials to fulfil new orders. The rate of production growth was the slowest since last October.”

Of course, The Fed will shrug this off as “transitory” – it’s not, as we detailed here – or merely blame it on climate change!?