Dr. Scott Atlas isn’t the only Stanfordite to embrace the principles of the Great Barrington Declaration. The former advisor to President Trump delivered a final address yesterday that summed up his criticisms of the US COVID-19 response, particularly the draconian lockdowns that destroyed millions of jobs and hundreds of thousands of small businesses. 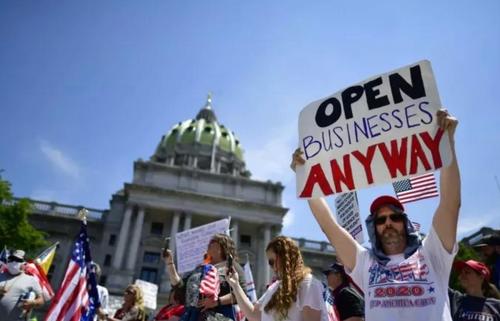 In his speech, Dr. Atlas warned that the response to COVID-19 in the US has underscored a lack of diverse viewpoints on American college campuses and in the American mainstream press.

First, I have been shocked at the enormous power of the government, to unilaterally decree, to simply close businesses and schools by edict, restrict personal movement, mandate behavior, and eliminate our most basic freedoms, without any end and little accountability.

Second, I remain surprised at the acceptance by the American people of draconian rules, restrictions, and unprecedented mandates, even those that are arbitrary, destructive, and wholly unscientific.

This crisis has also exposed what we all have known existed, but we have tolerated for years: the overt bias of the media, the lack of diverse viewpoints on campuses, the absence of neutrality in big tech controlling social media, and now more visibly than ever, the intrusion of politics into science. Ultimately, the freedom to seek and state the truth is at risk here in the United States.

Well, as it turns out, Dr. Atlas isn’t alone. In a recent email interview with Newsweek, Stanford’s Dr. Jay Bhattacharya, a professor at the medical school, warned that the lockdowns would be remembered as the “biggest public health mistake we’ve ever made…the harm to people is catastrophic.” Bhattacharya was one of the co-authors, along with Dr. Atlas, of the Great Barrington Declaration.

I stand behind my comment that the lockdowns are the single worst public health mistake in the last 100 years. We will be counting the catastrophic health and psychological harms, imposed on nearly every poor person on the face of the earth, for a generation.

At the same time, they have not served to control the epidemic in the places where they have been most vigorously imposed. In the US, they have – at best – protected the “non-essential” class from COVID, while exposing the essential working class to the disease. The lockdowns are trickle down epidemiology.

Bhattacharya explained that his support of the declaration stems from “two basic facts”.

“One is that people who are older have a much higher risk from dying from COVID than people who are younger…and that’s a really important fact because we know who his most vulnerable, it’s people that are older. So the first plank of the Great Barrington Declaration: let’s protect the vulnerable,” Bhattacharya said.

“The other idea is that the lockdowns themselves impose great harm on people. Lockdowns are not a natural normal way to live.”

He also cautioned that lockdowns have aggravated economic inequality by creating an undue burden for the poor. “it’s also not very equal,” Bhattacharya explained. “People who are poor face much more hardship from the lockdowns than people who are rich.”

As of Monday, the Great Barrington Declaration has received signatures from over 13,000 medical and public health scientists, and more than 41,000 medical practitioners, along with at least 754,399 “concerned citizens”.

US states are already moving to roll back restrictions, with Texas and Mississippi leading the charge to lift all remaining vestiges of the lockdown, while blue states like Connecticut and Maryland have also laid out plans to ease their COVID measures, as the closures increasingly chafe voters. Meanwhile, federal authorities like Dr. Anthony Fauci have continued to urge states to wait, warning that mutated strains of the virus could cause a resurgence if the US gives them an opening.

What Is The Shipping Container Shortage Telling Us About The Economy?

BMW Will Produce An Additional 250,000 EVs Over Next 3 Years, CEO Says