Former Starbucks CEO and one-time Independent presidential wannabe Howard Schultz made an appearance at Bloomberg’s Equality Summit on Thursday to try and remind President Biden – whose administration has maintained many, but not all, of the tough on China policies adopted by his predecessor – that the US and China must cooperate. 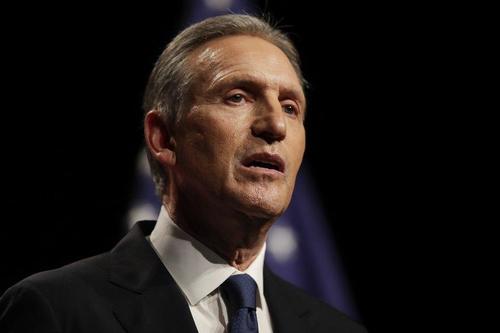 In a seemingly contradictory quote, Schultz told his audience that China is “an adversary but not an enemy” and that America and the Chinese “must figure out a way to cooperate.”

Schultz added: with the “rhetoric of the last four years” being unhelpful to finding common ground, if relations aren’t improved, “there will be significant problems,” he said, though he is “confident that we will find a way to cooperate to benefit the rest of world”.

Switching topics to economic inequality, an issue that Starbucks has long claimed to lead on, regarding domestic US issues, Schultz said the “underbelly” of inequality in American society can be seen in broadband Internet access, which he said is lacking in more than half of low-income households.

“That alone demonstrates the significant divide in America,” Schultz proclaimed.

But to improve racial harmony, “we need to do better at teaching sensitivity and compassion,” he said. “We have to have a society with respect and dignity for all”. And finally, Schultz turned his attention to small business owners, whom he said have been among the hardest-hit during the pandemic.

A “large majority” of those affected “have been Black- and brown- owned businesses” which threatens the “social fabric in neighborhoods and communities”.

Whatever you might think of Schultz and his virtue-signaling, it’s important to remember that China has played an increasingly critical role to Starbucks’ bottom line over the last year (while he no longer runs the company, he’s still the founder, and a board member). Even though Chinese consumers haven’t taken to coffee like American executives had hoped (who can forget the demise of Starbucks’ domestic competitor Luckin Coffee?), Starbucks’ stores comprised a larger portion of its international revenue in 2020. What’s more, Starbucks’ stores in China were largely open for most of last year, unlike the company’s stores in the US.

With senior diplomats from the US and China meeting in Alaska today and tomorrow, expect to hear more of this from American captains of industry as we head into the weekend.