After yesterday’s “stellar” 10Y auction, which according to many came at just the right time to avoid a crash in the bond market – first, and then in stocks – moments ago we got the other, just as closely watched auction, today’s sale of $24 BN in 30Y paper which likewise could have make, or break, the bond market if it was a dud.

Well, it wasn’t, and in fact today’s 30Y auction was one of the strongest ultra auctions in recent history.

The bonds offered for sale, which at $24 billion was just shy of an all time high… 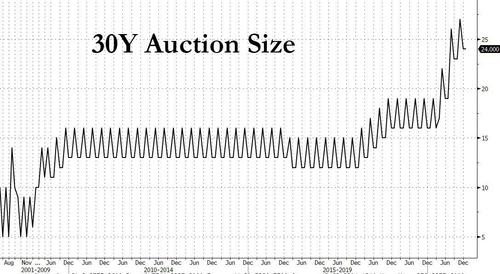 … priced at a yield of 1.82%, which while clearly higher than last month’s 1.665%, stopped through the 1.839% When Issued by a whopping 1.4bps, indicating just how badly the When Issued market has misjudged demand for the paper.

But it was the internals that were the real showstopper, because with 68.6% Indirects, the highest since July and well above the 64.0% recent average, Directs took down 17.2%, the highest since Feb 2020, leaving Dealers with a just low 14.2%, a record low number in 30Y auction history. 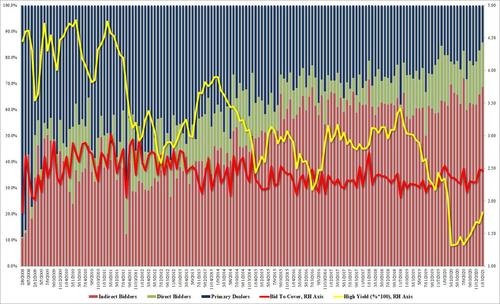 Bottom line: demand for 30Y paper was so very strong, and so clearly not matching the recent weakness in the secondary market, that the 10Y yield crash a massive 3bps(!) once the auction results hit, as it plunged from 1.10% to 1.07%. 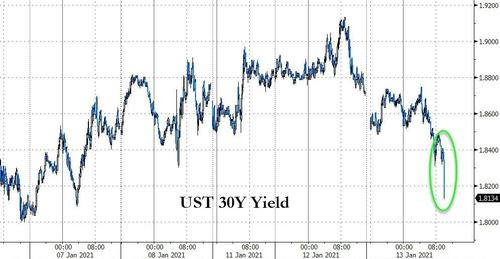 While clearly good news for bonds, this is also very good news for stocks because it means there is much more capacity – and demand – for duration at current levels of perceived inflation, which in turn will help boost demand for risk assets before both bonds and stocks take the express elevator lower.