After yesterday’s mediocre, record-large 3Y auction there was some consternation that today’s issuance of benchmark 10Y notes (in the form of a 9-year 10-month reopening of cusip AC3) would be met with less than stellar demand especially following today’s blowout in rates. Well, not so fast, because as we noted ahead of the auction, with a massive short overhand which pushed the 10Y to a -0.65% special rate in repo, it was likely that we would see significant short covering into today’s auction…

10Y trading -0.65% special. Lots of shorts into auction. Should be a strong auction

…. despite the massive $38BN offered for sale today. 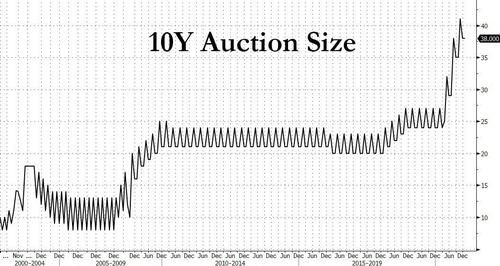 The Bid to Cover was also quite impressive, rising from 2.33 in Dec to 2.45, the highest since October and above the six-auction average of 2.41.

The internals were also solid, with Indirects taking down 62.2%, virtually unchanged from last month, and also above the 61.2 recent average. More notably, Directs took down 17.8%, the most since December 2019, leaving Dealers holding just 20% of the take down. 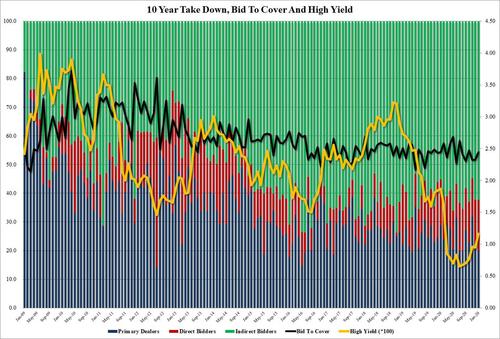 Altogether a very impressive auction, setting the bond market well for tomorrow’s 30Y sale, and one which indicates that fears about fading demand amid rising yields remain largely unfounded.  The market agreed, and promptly pushed 10Y lower by about 1 basis point. 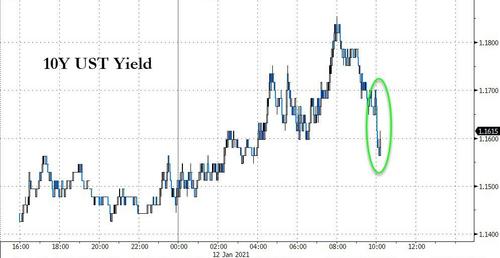