Economist and President Trump’s economic adviser Stephen Moore dismissed the need for a “massive stimulus bill” to generate economic growth in 2021, according to The Hill.

Moore, speaking with radio host John Catsimatidis on WABC 770 AM, said the latest economic estimates show the economy should recover “without all of this government spending.”

“I’m not so sure we need this massive stimulus bill. We just need to get the vaccine out there,” Moore said. “And we need to get the businesses open in New York City and Los Angeles and Chicago and San Francisco.”

With the vaccine rollout already underway and some 3.5 million doses have already been distributed – the government has fallen behind in its goal of vaccinating 20 million people by the end of December. At the current rate, it could take years to vaccinate the whole population. Goldman Sachs’ latest research note shows about 1% of the US population has been vaccinated. 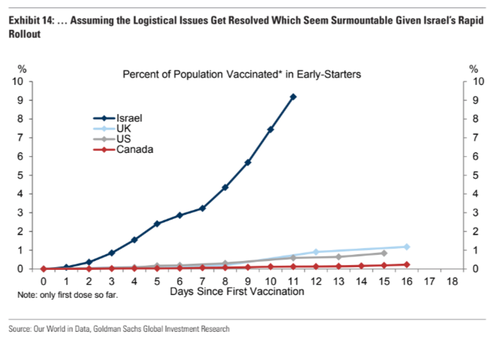 To mitigate the threat of a double-dip recession, Trump signed a $2.3 trillion omnibus spending bill late last month, which included $900 billion in virus relief for low-income folks and businesses. Taxpayers who qualify have already started receiving $600 stimulus checks. This is the second round of direct transfer payments to the working poor since Trump signed a similar stimulus bill when the pandemic began.

The latest round of checks is coming just in time as Chase consumer credit and debit card spending data shows spending trends among Americans have stalled. 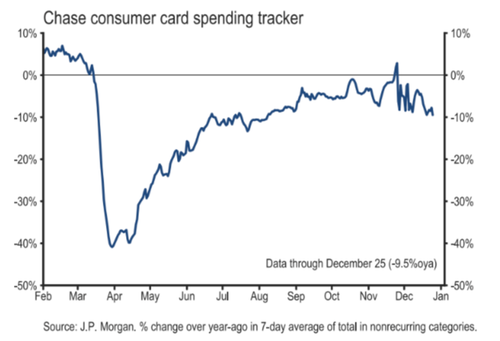 Trump, disgusted with Republicans, has joined Democrats and urged Congress to increase direct transfer payments to $2,000 for the working poor. However, Senate Majority Leader Mitch McConnell repeatedly shut it down.

“I think it’s important to realize, we have spent now, already $2.5 trillion. That’s more money than we collect and income taxes for an entire year. Plus, this would add another $500 billion to the debt,” he explained. “Plus, President-elect Biden is now saying he wants another one or 2 trillion dollars stimulus on top of that.”

Moore said the federal government has “spent money like it’s M&M’s” throughout the coronavirus pandemic.

“It’s not a way to stimulate the economy,” he warned, suggesting, “We are passing these costs onto our children and grandchildren.”

The federal government will soon learn that repeated helicopter drops this year will have to continue, or the people will get angry. On Saturday, Senate Majority Leader Mitch McConnell and House Speaker Nancy Pelosi’s homes were vandalized by activists displeased by the politicians for failing to pass the $2,000 direct transfer payment last week.